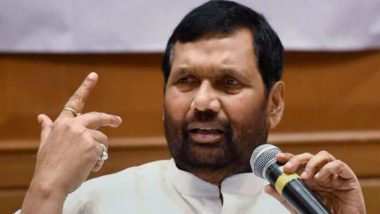 New Delhi, October 8: Union Minister of Consumer Affairs, Food and Public Distribution Ram Vilas Paswan died on Thursday. The news of the death of the Union Minister was announced by his son Chirag Paswan on Twitter. Paswan's son Chirag shared a photo of the father-son duo with an emotional line stating, 'you will always be with me'. Miss you Papa'. The Rajya Sabha MP was 74. Ram Vilas Paswan, who founded Lok Janshakti Party in 2000, had been admitted to Fortis Escort Hospital in Delhi since August 23. Paswan, an eight-time Lok Sabha member, was hospitalised after he went for a routine checkup.

Paswan was one of the senior-most ministers in the Modi government. He was suffering from kidney and heart problems and was undergoing treatment for a long time. He had been very active in implementing the free grain distribution scheme run by his ministry during the coronavirus period. Ram Vilas Paswan Urges People to Boycott Chinese Products Amid Heightened Border Tensions in Ladakh.

Paswan did not contest the 2019 Lok Sabha polls. He was elected to Rajya Sabha for the second time in June last year. He had a Bachelor of Laws and a Master of Arts degrees.

(The above story first appeared on LatestLY on Oct 08, 2020 08:51 PM IST. For more news and updates on politics, world, sports, entertainment and lifestyle, log on to our website latestly.com).