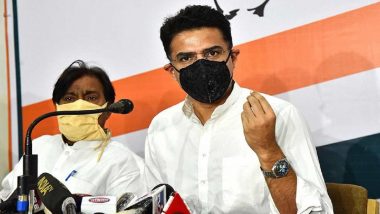 New Delhi, August 10: In his reaction hours after meeting former Congress president Rahul Gandhi, former Rajasthan deputy chief minister Sachin Pilot said the issues raised by him were "ideological". His remarks came shortly after the party announced senior leaders Priyanka Gandhi, Ahmed Patel and KC Venugopal as members of the committee that will hear his grievances.

Pilot, while speaking to a  news channel, said the issues raised by him were essential to be raised even though they triggered a political row. "The issues were ideological, it was important to raise them," he said. Congress Forms Panel To Look into Grievances of Rebel Leaders After Sachin Pilot Meets Rahul Gandhi.

"Several things were said, I heard a lot of things. I was surprised by a few things that were said. I think we should always maintain restraint and humility. There is no place for personal malice in politics. We had formed govt in Rajasthan after 5 years of hard work," Pilot added.

Venugopal, a top functionary of the All India Congress Committee (AICC), addressed the media shortly after party president Sonia Gandhi finalised him, along with Ahmed Patel and Priyanka Gandhi as members of the panel that will hear Pilot's case.

'Sonia Gandhi Heard All Our Concerns'

#WATCH Sonia Gandhi Ji heard all our concerns and the governance issues that we raised. Formation of the 3-member committee by the Congress President is a welcome step. I think all the issues will be resolved, says Sachin Pilot, Congress #RajasthanPoliticalCrisis pic.twitter.com/fxHPr9A7gY

"Indian National Congress will go unitedly by mutually respecting each other and solving the concerns and issues," he said, expressing hope that the tensions would be resolved between Pilot and Chief Minister Ashok Gehlot through dialogue.

Pilot stoked a political storm in Rajasthan last month after he, along with 18 MLAs of the Congress, shifted base to BJP-ruled Haryana. They were camping at a hotel based in Manesar, and refrained from returning even as the party issued two "whips" asking them to attend the Congress Legislative Party (CLP) meeting.

Amid a month-long logjam, an icebreaker was reported earlier today when Pilot met Rahul Gandhi in presence of Priyanka. The trio reportedly discussed the issues he had raised against Gehlot and assured him of solving the grievances through dialogue. Shortly after the meeting, Bhanwar Lal Sharma, a supporter of Pilot, arrived in Jaipur to meet CM Gehlot.

(The above story first appeared on LatestLY on Aug 10, 2020 10:38 PM IST. For more news and updates on politics, world, sports, entertainment and lifestyle, log on to our website latestly.com).