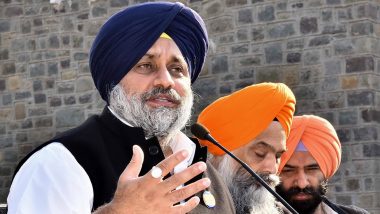 Chandigarh, September 26: Shiromani Akali Dal (SAD), the former ruling party of Punjab and one of the oldest allies of the Bharatiya Janata Party (BJP), has decided to break ranks from the National Democratic Alliance (NDA). In a statement issued on Saturday, the Punjab-based party blamed Centre's "stubborn" approach on the row over Minimum Support Prices as the reason behind its decision to quit the coalition. Harsimrat Kaur Badal on Her Resignation, Says ‘Saddened My Voice in Support of Farmers Was Not Heard’.

"Akali Dal has decided to pull out of BJP-led NDA alliance because of the Centre’s stubborn refusal to give statutory legislative guarantees to protect assured marketing of farmers crops on MSP and its continued insensitivity to Punjabi and Sikh issues," the SAD said in a statement issued following a meeting of top party office-bearers.

In the past week, the Akali Dal jolted the BJP inside the Parliament after Harsimrat Kaur Badal, who was a Union Minister, decided to resign from her post. The announcement was made in the Lok Sabha by her husband and senior Akali Dal leader Sukhbir Singh Badal.

The party, despite breaking away from the central government last week, did not immediately confirm their exit from the NDA. Harsimrat, who had been a Minister in the two consecutive Narendra Modi-led governments, said she was hopeful that the Prime Minister would intervene and ensure that a legislative guarantee is added in the new legislations to confirm the protection of MSP-based procurement.

Shiromani Akali Dal (SAD) has decided to pull out of BJP-led NDA alliance because of the centre’s stubborn refusal to give statutory legislative guarantees to protect assured marketing of farmers crops on MSP & its continued insensitivity to Punjabi & Sikh issues: SAD pic.twitter.com/lC3xHczDm2

The Agriculture Reform Bills passed by the central government last week mandates farmers to directly sell their harvest to private purchasers, instead of facilitating the sale of crops through the APMCs. While the Centre claimed that this would provide farmers with more options and better prices, the agrarian bodies have alleged a ploy to dismantle the MSP regime by weakening the APMCs.

The protest by farmers prompted Prime Minister Narendra Modi to issue multiple appeals, claiming that the law passed by his government would not deprive the farmers of minimum support prices or MSP - which is guaranteed to farmers on 22 major crops.

While farmers across the nation have launched protest against the Farm Bills, the maximum agitation was seen in Haryana and Punjab - where wheat and paddy growers rely on MSP-based procurement.

At a number of demonstrations in Punjab, the protesters reportedly questioned the Akali Dal over not severing ties with the NDA, despite quitting the Cabinet. Sukhbir Badal, considered as de-facto chief of the party, had told a news channel that the NDA does not exist in the manner it used to. "When was the last NDA meeting convened? Our party will take a decision after a meeting shortly," he said on Friday, a day before the seperation from the saffron camp was officially confirmed.

(The above story first appeared on LatestLY on Sep 26, 2020 10:44 PM IST. For more news and updates on politics, world, sports, entertainment and lifestyle, log on to our website latestly.com).