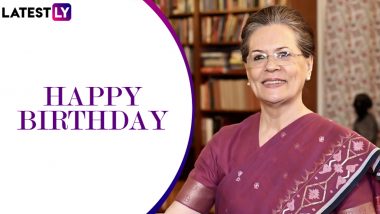 New Delhi, December 9: Congress Interim President Sonia Gandhi celebrates her 73rd birthday today. Sonia Gandhi was born on December 9 in 1946. She was appointed as Congress President for the first time in 1998. She held the top post for record 19 years until her son Rahul Gandhi took over in 2017. When Rahul quit the post following Congress's defeat in 2019 Lok Sabha elections, the grand old party again turned to Sonia who then decided to lead the party for the second time after the nearly two-decade-long first stint. Sonia Gandhi Not to Celebrate Birthday in Wake of Rising Cases of Assaults on Women.

Sonia Gandhi entered politics in 1994, three years after her husband, former Prime Minister Rajiv Gandhi, was assassinated. She is credited with Congress's two consecutive wins at the Centre and several in states. In 2004, she managed to bring disparate political groupings together on one platform and formed the United Progressive Alliance. The pre-poll coalition stumped the BJP out of power. The UPA retained power in the 2009 general elections as well. Sonia Gandhi Trains Guns at Govt on Gandhi Jayanti, Says Ruling Regime Wants to 'Replace Mahatma's Vision With RSS Agenda'.

On Sonia Gandhi's 73rd birthday, here are some lesser-known facts about Congress's Warhorse:

(The above story first appeared on LatestLY on Dec 09, 2019 07:00 AM IST. For more news and updates on politics, world, sports, entertainment and lifestyle, log on to our website latestly.com).