In 38 districts, including Ayodhya and Mathura, the nerve centres of Hindutva politics, a direct contest will take place between the BJP and opposition-backed candidates. In Bahraich, SP-supported Neha Ajiz withdrew her nomination paving way to victory for BJP's Manju Singh. 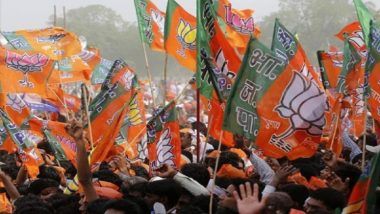 Lucknow, June 30: The ruling Bhartiya Janata Party in Uttar Pradesh has managed to win zila panchayat chairpersons seats in 21 districts even though it did not have the required numbers. The seats were won, after the rival contestants, either withdrew from the fray or turned their support to the ruling party.

In Saharanpur, Bahraich, Pilibhit and Shahjahanpur, the BJP-supported candidates got a walkover after the opposition-backed candidates withdrew their nomination.

The lone seat that the Samajwadi Party (SP) won unopposed is Etawah where SP President Akhilesh Yadav's cousin Anshul Yadav won the seat without any contest. State Election Commissioner Manoj Kumar said that in the remaining 53 seats, polling and counting of votes will take place on Saturday.

The unopposed election of 21 BJP-supported candidates comes amid allegations of opposition, mainly SP, accusing the ruling party of rigging and orchestrating withdrawal of nomination by opposition-backed candidates for political gains.

In 38 districts, including Ayodhya and Mathura, the nerve centres of Hindutva politics, a direct contest will take place between the BJP and opposition-backed candidates. In Bahraich, SP-supported Neha Ajiz withdrew her nomination paving way to victory for BJP's Manju Singh.

Things took an interesting twist in Shahjahanpur where SP-supported candidate Beenu Singh walked into the saffron camp, allowing the BJP's Mamta Yadav to get elected unopposed.

He, however, walked into the SP fold after the BJP did not support him in the chairman's election. However, the BJP managed to convince him and he withdrew his nomination on Tuesday.

In Saharanpur, BJP-backed Mange Ram Chaudhary got a walkover after BSP-supported Jaiveer a.k.a Johnny withdrew his nomination papers. The development came a day after BSP president Mayawati announced that her party would not support any candidates in panchayat elections. She cited rigging as the key reason for staying away from the rural local bodies' elections.

(The above story first appeared on LatestLY on Jun 30, 2021 09:46 AM IST. For more news and updates on politics, world, sports, entertainment and lifestyle, log on to our website latestly.com).