The All India Majlis-e-Ittehadul Muslimeen or AIMIM is likely to contest 100 seats in the Uttar Pradesh assembly elections, slated to be held in early 2022. 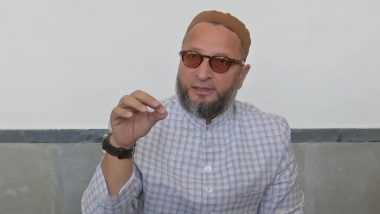 Lucknow, June 12: The All India Majlis-e-Ittehadul Muslimeen or AIMIM is likely to contest 100 seats in the Uttar Pradesh assembly elections, slated to be held in early 2022. Speaking to a leading daily, AIMIM Uttar Pradesh chief Shaukat Ali said the party is keen on contesting at least 100 seats. AIMIM leader Asaduddin Owaisi will take the final call. The Hyderabad-based party has geared up for the polls in Uttar Pradesh. Uttar Pradesh Assembly Elections 2022: AIMIM Announces 1st Candidate for Polls.

"We are working hard and would like to contest in at least 100 constituencies. But, a final decision would be taken by our party national president Owaisi," Shaukat Ali was quoted as saying. The AIMIM contested 36 seats in Uttar Pradesh when assembly elections were held in 2017, but failed to win a single seat. However, it bagged 24 seats in recently-concluded zilla panchayat elections in Uttar Pradesh. COVID-19: Election Commission Confident of Holding Five Assembly Polls in 2022 on Time, Says CEC Sushil Chandra.

Owaisi's AIMIM has already joined Om Prakash Rajbhar-led Bhagidari Sankalp Morcha (BSM). Rajbhar's Suheldev Bharatiya Samaj Party (SBSP), which is leading the coalition of nine parties, was part of the BJP-led NDA in the state when Rajbhar was a minister till he parted ways with the saffron party following differences with Chief Minister Yogi Adityanath. A TOI report said the BJP is trying to bring Rajbhar back into the NDA.

The BSM is expected to woo Muslim, Dalit and OBC voters. Muslims form 19.23 percent of the population in Uttar Pradesh, according to the 2011 Census. They play decisive role in many constituencies. Dalits constitute 21.1 percent and Other Backward Classes (OBCs) constitute 40 percent of Uttar Pradesh’s population.

(The above story first appeared on LatestLY on Jun 12, 2021 02:51 PM IST. For more news and updates on politics, world, sports, entertainment and lifestyle, log on to our website latestly.com).