West Bengal Assembly Elections 1982: Ahead of Vidhan Sabha Polls 2021, A Look Back at The Polling, Alliances and Results of The Elections in 1982 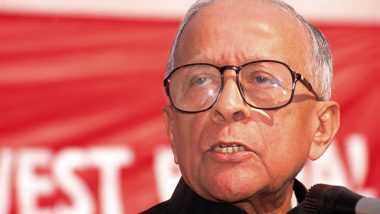 In 1982, Jyoti Basu was seeking the second term as the chief minister of West Bengal. The Left Front, led by the Communist Party of India (Marxist), had gained three new members; the Communist Party of India (CPI), the West Bengal Socialist Party (WBSP) and the Democratic Socialist Party (DSP). In the 1982 elections, the Congress emerged as the main opposition party in the state. West Bengal Assembly Elections 2021 Dates: Polling in 8 Phases Between March 27 and April 29, Results on May 2; Check Full Schedule Here.

The Left front comprising CPIM, CPI, WBSP, DSP and other small parties managed to bag 238 seats out of 294. The CPI won 174 assembly seats. Meanwhile, the Congress (I), which fielded its candidates on 250 seats, managed to win only 49. Congress (S) also performed poorly and won only four seats out of 28 seats on which it fielded its candidates. The BJP contested on 52 seats. The saffron party failed to open its account. The Left Front-led by CPIM formed the government, with Basu becoming the CM for the second consecutive time. West Bengal Assembly Elections 1996: A Look Back at The Polling, Alliances and Results of The Previous Election Ahead of 2021 Polls.

If we talk about the 2021 Assembly polls in West Bengal, the main competition is between the BJP and Mamata Banerjee-led Trinamool Congress (TMC). Banerjee is seeking to become the CM for the third consecutive. However, the BJP is posing a tough challenge for the TMC. In the recent past, around 50 TMC leaders had joined the BJP. The Left parties, including CPIM, are contesting the 2021 assembly polls in alliance with the Congress.

(The above story first appeared on LatestLY on Mar 07, 2021 05:48 PM IST. For more news and updates on politics, world, sports, entertainment and lifestyle, log on to our website latestly.com).