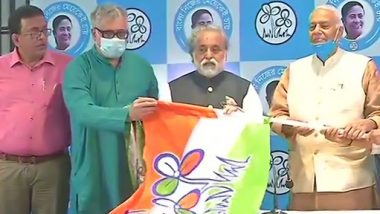 Kolkata, March 13: Former Bharatiya Janata Party (BJP) leader Yashwant Sinha on Saturday joined Trinamool Congress (TMC) in Kolkata. Sinha joined Mamata Banerjee's party just weeks ahead of West Bengal Assembly Elections 2021. Sinha is a former Indian administrator, politician, and a former Minister of Finance. He was a senior leader of the Bharatiya Janata Party before he quit the party on April 21, 2018. In West Bengal, voting for the 294 seats will be held in 8 phases starting March 27. The counting of votes will take place on May 2.

After joining the party, Sinha said that the country is facing an unprecedented situation today. The newly-elected TMC leader said that the strength of democracy lies in the strength of the institutions of democracy. "All these institutions including the judiciary have become weak now", he added. West Bengal Assembly Elections 2021: Aishe Ghosh, JNU Student Leader, to Contest Poll From Jamuria as CPI(M) Candidate.

Taking a dig at the BJP, Sinha said that the BJP during the time of Atal Bihari Vajpayee believed in consensus but today's government believes in crushing and conquering. "Akalis, BJD have left the BJP. Today, who is standing with BJP?", Sinha questioned.

Sinha was also the National Spokesperson of the Bharatiya Janata Party in June 1996. He was appointed finance minister in March 1998 and later he became the Minister for External Affairs on July 1, 2002.

(The above story first appeared on LatestLY on Mar 13, 2021 12:53 PM IST. For more news and updates on politics, world, sports, entertainment and lifestyle, log on to our website latestly.com).