BJP leaders, who were taken hostage with family members by protesting farmers in a house in a Punjab town, were rescued early Monday by police after an over 12-hour ordeal and with the intervention of the high court. 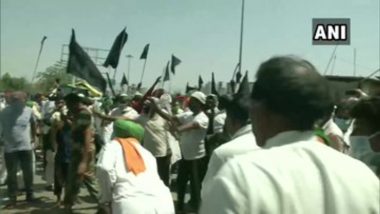 Chandigarh, July 12:  BJP leaders, who were taken hostage with family members by protesting farmers in a house in a Punjab town, were rescued early Monday by police after an over 12-hour ordeal and with the intervention of the high court.

Rescued leaders blamed the farmers for unlawful act in the pretext of protesting against the three farm laws enacted by the Central government. They blamed the state Congress government for supporting the farmers.  India News | UP Block-panchayat Polls: BJP Claims Victory in Majority of Seats; Oppn Alleges Misuse of Official Machinery

The incident occurred in Rajpura town, some 40 km from the state capital, where state general secretary Bhupesh Aggarwal was taken hostage along with others in a house on Sunday evening.

Aggarwal told the media that he along with other party leaders and workers assembled in the town a day earlier for a district-level party meeting at the Bharat Vikas Parishad building. The farmers reached the meeting venue and disrupted it.

Later they decided to hold a meeting in a house and they assembled there. The farmers reached there and held them hostage by snapping the water and electricity supply.

In a video on social media, protesters could be seen chasing and heckling local councillor Shanti Swarup and even tearing his clothes while he was being taken away by policemen. This incident occurred on Sunday.

However, the police denied he was attacked.

A police team led the Deputy Inspector General Vikramjit Duggal was at the spot to rescue and escort the hostage leaders to safety. The situation throughout the night remained tense.

When the holed up leaders were rescued by the police they claimed that the farmers chased, abused and heckled them. Also their vehicles were pelted with stones.

However, farmer leader Prem Singh Bhangu blamed Aggarwal for provoking farmers by using abusive language. He said the incident flared up when Aggarwal's bodyguard pointed a pistol at the peacefully protesting farmers.

The BJP approached the Punjab and Haryana High Court late Sunday and sought its intervention for the safety of its leaders.

Directing the state to ensure the persons alleged to be illegally detained "are provided safe exit with adequate security and no harm is caused to anyone of them", Justice Suvir Sehgal asked the state to summit the report on July 12 at 2 p.m.

Reacting to attack on the party leaders, Punjab BJP president Ashwani Sharma said: "This is an attack on democracy. There is complete lawlessness in Punjab as police have become mute spectators."

The farmers in Punjab and Haryana have been protesting against the farm laws as they feel that these laws would pave the way for the dismantling of the minimum support price (MSP) system, leaving them at the mercy of big corporate entities.

They are boycotting the BJP leaders too.

In October last, the vehicle in which BJP chief Ashwani Sharma was travelling was attacked by 30-40 people with bricks and sticks near the toll plaza in Hoshiarpur town.

Also the police fired tear gas shells and used water cannons in January to disperse protesting farmers, who stormed the helipad and vandalised the stage where Haryana Chief Minister Manohar Lal Khattar was to address a 'kisan mahapanchayat' to highlight the benefits of Centre's agriculture laws.

(The above story first appeared on LatestLY on Jul 12, 2021 11:46 AM IST. For more news and updates on politics, world, sports, entertainment and lifestyle, log on to our website latestly.com).