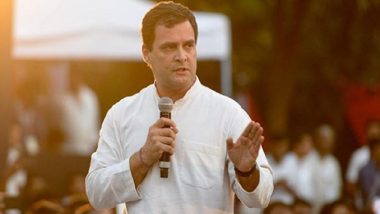 "The Truth. Government of India's wrong decisions during COVID-19 second wave killed 50 lakh of our sisters, brothers, mothers and fathers," the Congress leader said in a tweet, attaching a report of the Washington-based think tank, Centre for Global Development, which claimed that nearly 50 lakh (4.9 million) people might have died in India due to COVID-19 between January 2020 and June 2021.  Farmers Protest: ‘Everything Recorded in Tears Who Lost Their Loved Ones’, Says Rahul Gandhi

His remarks came a day after the government said in the Parliament that no one died due to shortage of oxygen during the second wave of COVID-19.

(The above story first appeared on LatestLY on Jul 21, 2021 08:01 PM IST. For more news and updates on politics, world, sports, entertainment and lifestyle, log on to our website latestly.com).