Harshad Mehta Story: What Was The 1992 Securities Scam? What Happened to His Life After The Case Unraveled?

Till the early 90s, banks in India were barred from directly investing in equity markets. Mehta, a master in his game, used a loophole in the system to squeeze capital from the banking sector and use it for artificially spiking the rate of shares. In the process, he ended up exponentially growing his personal wealth. 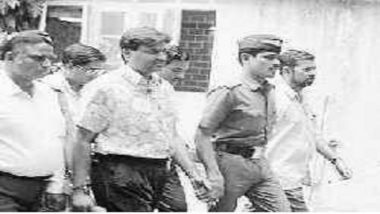 Harshad Mehta, the name, is back in the headlines. The story of Harshad Mehta, the late infamous stockbroker of early 1990s, has yet again turned into a subject of interest following the release of Scam 1992 - a show based on the share market scandal that year - on streaming platforms. What exactly happened in 1992 when Mehta emerged as kingpin of a financial scandal? Here's a look back at the events of 1992. SCAM 1992: The Harshad Mehta Story Is Currently #1 Show In The World With 9.6 IMDb Rating.

Till the early 90s, banks in India were barred from directly investing in equity markets. Mehta, a master in his game, used a loophole in the system to squeeze capital from the banking sector and use it for artificially spiking the rate of shares. In the process, he ended up exponentially growing his personal wealth.

How the scam was executed? A bank, at the time, was required to go through another broker to buy securities and forward bonds from other banks. This was used by Mehta to lure the bank into depositing money into her personal account in lieu of higher rate of returns. The deposited money was used by him to buy bulk shares of select-firms. This, in turn, led to an artificial hike and demand for shares of those companies.

All About The 1992 Securities Scam

The Indian Stock Market witnessed a rapid growth during 1991 and early 1992. It was assumed by the economists that the growth in the market was because of the growth story of India at that time. However, by April, 1992, it came to light that certain groups of stock brokers were defrauding the banks of their funds in the name of securities transactions and diverting the funds to stock market through their own accounts.

The Central Bureau of Investigation (CBI) registered several cases against various groups of stock brokers. Further, a Joint Parliamentary Committee (JPC) was also appointed to look into the scam. The JPC observed, “The scam is basically a deliberate misuse of public funds through various types of securities transactions with the aim of illegal siphoning off funds of banks and PSUs to select brokers for speculative transactions." The major groups of brokers involved were - Harshad S. Mehta Group, Bhupen Dalal Group, Hiten Dalal Group and Ajay Kayan Group.

The above brokers used to commit frauds in the securities transactions with banks like SBI, NHB, UCO Bank and certain cooperative banks, etc. in Ready Forward/ Double Ready Forward/ Switch Deals, etc. by furnishing bogus securities papers like BRs and SGL forms, which did not have any securities backing. The funds deployed by such banks were diverted to the stock market for the personal transactions of the brokers, whereby they enriched themselves.

As per the Janakiraman Committee Report of RBI, the scam was of the magnitude of Rs.4025 crore. CBI registered several cases against the above group of brokers for defrauding the banks in the names of securities transactions and chargesheeted those cases. CBI, BS&FC, Mumbai Branch registered 17 cases, out of which 15 were chargesheeted. Of these 15, 11 cases have been disposed off by the TORTS Court in Mumbai.

How The Scam Came to Light, What Happened to Mehta Then

The case was unraveled after journalise Sucheta Dalal, through her column in the newspaper Times of India exposed the modus operandi of the securities scam. Her report was published on April 23, 1992, and subsequently, the market regulators and probing agencies took cognisance of the case.

Mehta and his brothers, Ashwin Mehta and Sudhir Mehta, were arrested in 1992. Their properties were taken into custody by the Custodian appointed under TORTS Act. On completion of the investigation, a chargesheet was filed in the TORTS Court in 1996 against Harshad Mehta, his associates and certain bankers. This case ended in conviction in April, 2006.

Mehta, however, died on December 31, 2001, due to a heart-related ailment. Before being rushed to the Thane Civil Hospital, where he breathed his last, Mehta was lodged in Thane jail. He was taken to the medical facility after he had complained of chest pain. The man who was once considered as the single-biggest influencer of stock market died at the age of 47.

(The above story first appeared on LatestLY on Oct 29, 2020 11:06 AM IST. For more news and updates on politics, world, sports, entertainment and lifestyle, log on to our website latestly.com).