Surgical Strike Day 2022: Know How India Carried Out Daring Operation Against Pakistan and Names of Heroes Behind Successful Anti-Terror Strike

Following the killings of the soldiers, there was grief and anger brewing among the security forces and civilians. To avenge the death of martyrs and teach Pakistan a lesson, the Indian Army conducted surgical strikes against terror launch pads in Pakistan-occupied Kashmir (PoK) on the intervening night of September 28-29. 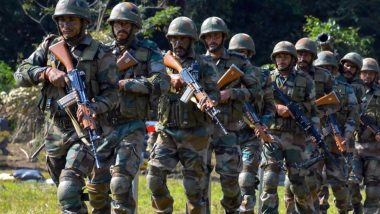 Mumbai, September 29: It instills great pride in every countryman when we hear the word "Surgical Strike." It's been six years since the Indian Army's anti-terror operation against terrorist camps situated in Pakistan-occupied Kashmir was launched to take revenge for the fedayeen attack on the Indian Army brigade Headquarters in the Uri district. The strike on the intervening night of September 28 and September 29, 2016, was in response to a cowardly attack by Pakistan-based terrorists on an army base in Kashmir’s Uri on September 18 in which 19 Indian soldiers were killed.

Following the killings of the soldiers, there was grief and anger brewing among the security forces and civilians. To avenge the death of martyrs and teach Pakistan a lesson, the Indian Army conducted surgical strikes against terror launch pads in Pakistan-occupied Kashmir (PoK) on the intervening night of September 28-29. Indian Army Shifts Army Day Parade 2023 Outside Delhi, To Be Held in Southern Command Area on January 15.

Since then, September 29 has been observed as "Surgical Strike Day". During this highly successful mission, the Indian Army destroyed multiple targets in PoK. All these targets were launch pads for terrorists for infiltrating into Jammu and Kashmir to carry out attacks against military and civilian targets.

General Dalbir Singh Suhag (retd): The Chief of the Army Staff (COAS) of the Indian Army when India conducted surgical strikes, along with other senior Army officers wargamed every possible reaction from Pakistan. General Suhag had given clear direction to the team that nobody should be left behind.

Lieutenant General Deependra Singh Hooda (retd): The former commanding officer of the Northern Army Command, is hailed as the main architect of the much-lauded surgical strikes. He oversaw the operation during which the Indian Army inflicted "significant casualties" on Pakistan-based terrorists.

Major Rohit Suri: Brave man of the 4 Para (Special Forces) who led the team that carried out the daring cross-border surgical strike. Major Suri showed exemplary leadership and courage beyond the call of duty. He also displayed utter disregard for his personal safety and showing 'raw courage,' neutralised two terrorists in a close-quarter combat

Naib Subedar Vijay Kumar: The courageous subedar opened an extremely heavy volume of fire onto the terrorist hideout, thereby enabling smooth closing in by the assault group to the target. He also gunned down two terrorists in the operation despite coming under fire. Indian Army Deploys Ultra-light M-777 Howitzers in Forward Locations Along LAC in Arunachal Pradesh.

How the Mission Was Carried Out:

With New Delhi under pressure after the fedayeen attack, India had to give an answer. Indian Army deployed special forces in Bhimber, Hotspring, Kel, and Lipa sectors on the Pakistan side of the Line of Control and the stage was set for a performative attack across the LoC, targeting the launch pads used by militants to conduct their cross-border attacks. On September 29, three to four teams, comprising a total of 70–80 soldiers from the 4th and 9th battalions of the Indian Army's Para Special Forces, were airdropped into the Pakistan-occupied side under heavy artillery fire by India to distract the neighbour. The special mission was carried out between 12:30 am and 4:30 am on the intervening night of September 29.

One team then crossed the LoC in the Nowgam sector of Kupwara district, while the other one simultaneously crossed the LoC in Poonch district. By 2 am, the special forces teams had travelled 1 to 3 km on foot and had begun killing terrorists discreetly with guns and destroying bases with hand-held grenades and 84 mm rocket launchers. Special Forces, during the mission, destroyed at least seven terrorist camps and killed 38 terrorists in the process.

The brave heroes then swiftly returned to the Indian side of the Line of Control, suffering only one injury, a soldier wounded after stepping a land mine.

(The above story first appeared on LatestLY on Sep 29, 2022 12:43 AM IST. For more news and updates on politics, world, sports, entertainment and lifestyle, log on to our website latestly.com).