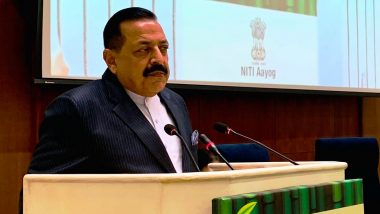 "An estimated 40 million people will be employed by ocean-based industries by 2030. The Deep Ocean Mission is the result of our ambition to explore the unlimited possibilities of the ocean. The mineral wealth which is hidden in the sea, the thermal energy which is in the sea water, can give new heights to the development of the country," he said at an event to mark World Oceans Day at the Ministry headquarters here.  World Ocean Day 2022 Date & Theme: Know History, Objective, Significance, Here's All You Need To Know About the International Event

"The R&D and exploration activities in the Amrit Kaal of the next 25 years will be an important hallmark of India's economy when it turns 100. Just as we have the Ministry of Earth Sciences, 20 years from now, we will have a Ministry of Ocean Industry," he said.

Stating that trials for both the space and ocean manned missions have reached advanced stage and the unique feat will be achieved, most likely, in the second half of 2023, Singh said: "Sea trials of 500 metres rated shallow water version of the manned submersible are expected to take place in early part of 2023, followed by the MATSYA 6000, the deep-water manned submersible which will be ready for trials by the second quarter of 2024."

The Minister also interacted with academia, students, officials and common citizens who undertook coastal clean-up campaigns at nine maritime districts in Kerala and at Chennai beach. He lauded the efforts of Vice Chancellors, PRIs, and corporations for collecting single use plastic, electronic and medical scrap during the beach cleaning operations at 10 locations carried out to mark the World Oceans Day.

Earth Sciences Secretary M. Ravichandran said: "India's long coastline of 7,517 km contributes to ecological richness, biodiversity and economy. But every year thousands of tonnes of garbage comprising plastics, glass, metals, sanitary, clothes etc. reach the oceans and plastics contribute a major portion of the total garbage that finds its way to the ocean."

"Situation needs to change and we all need to work for it," he said.

(The above story first appeared on LatestLY on Jun 08, 2022 10:21 PM IST. For more news and updates on politics, world, sports, entertainment and lifestyle, log on to our website latestly.com).