Yamuna Pollution: Mathura Priests Ban Entry of Politicians, Says ‘ They Are Liars, Only Seen When Elections Are Near’

The priests in Mathura have 'banned' the entry of politicians and officials in all religious ceremonies, following their failure to clean the Yamuna River. 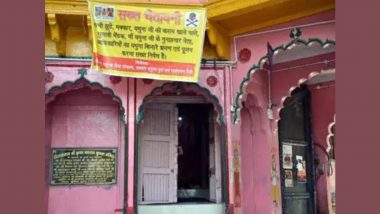 Mathura, July 8: The priests in Mathura have 'banned' the entry of politicians and officials in all religious ceremonies, following their failure to clean the Yamuna River.

The priests have put up a huge banner on the Ghats of the river, saying "They all are liars who swear on Yamuna ji. They are only seen when elections are near. These culprits of mother Yamuna and officials are banned from roaming around the Yamuna River and performing puja."  Thin Layer of Toxic Foam Seen Floating Near Yamuna River in Delhi (Watch Video)

A local priest, Radhey Shyam, said, "Several political leaders visit the Yamuna River during elections but disappear after winning polls. But this time we will not let that happen and are making our intentions clear through this banner."

He further said, "Political leaders have assured us time and again that Yamuna would be cleared of pollutants but nothing has changed on the ground."

National president of Akhil Bhartiya Teerth Purohit Mahasabha, Mahesh Pathak, also said that the river water was getting worse every day despite the fact that a party, which claims to understand the Hindu sentiments attached to the river, was in power in the state."

Meanwhile, members of district Congress have sent a jar of "polluted Yamuna water" to President Ram Nath Kovind through the local administration.

Former leader of Congress Legislature Party (CLP) Pradeep Mathur, said, "This is meant to convey the poor quality of water that is being consumed by local residents. Devotees are also forced to take a dip in such polluted waters."

He alleged that the BJP government in the state and at the Centre, had done nothing in this regard so far.

Meanwhile, Commissioner of Mathura-Vrindavan Municipal Corporation Anunay Jha, told reporters that soon all drains emptying into Yamuna will be diverted to the sewage treatment plants.

He said, "Out of 35 drains in Mathura and Vrindavan that go into the river, 20 have already been connected to sewage plants and work on the remaining will finish by October."

Last month, the National Green Tribunal (NGT) had said that sewage and industrial effluents were still being discharged in the Yamuna River from Kosi and Vrindavan and directed the Uttar Pradesh government to take remedial steps.

The NGT had cited a water quality analysis conducted by the UP Pollution Control Board for January 2021 which found biochemical oxygen demand (BOD) levels, coliform bacteria and fecal coliform in the river water several times higher than the maximum permissible levels.

(The above story first appeared on LatestLY on Jul 08, 2021 11:23 AM IST. For more news and updates on politics, world, sports, entertainment and lifestyle, log on to our website latestly.com).