Ariana presents tremendous energy when she is on stage and people generally talk about her energy and fitness levels while she is performing. She turned vegan in 2013 and since then she hasn’t turned back toward any animal-based products. 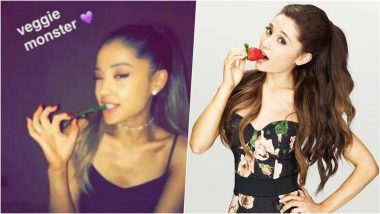 Ariana Grande is a songwriter, singer and actress. She was born on 26 June 1993 in Boca Raton, Florida. Ariana Grande will be celebrating her 29th birthday this year. To date, she has received 2 Grammy awards, one Brit Award, one Bambi award, two Billboard Music Awards, three American Music Awards, nine MTV Video Music Awards and 27 Guinness Worl Records. Because of her poor dietary habits, she has suffered from hypoglycaemia. Hypoglycaemia means a deficiency of glucose in the bloodstream. As you celebrate Ariana Grande’s 29th birthday, we at LatestLY, have curated a list of 3 favourite food of this talented rockstar.  Ariana Grande Rocks Little Brown Dolce & Gabbana Dress, Flaunts Signature Ponytail in New Pics.

The American music icon is completely fond of berries. She loves to eat strawberries. In one tweet she said, “I’ve had at least five strawberries a day since I can remember. They’re my favourite food!”

According to Grande’s trainer Harley Pasternack, she eats well and has always maintained a healthy diet. He reveals that she loves eating Japanese food like daikon, lotus, and adzuki beans-almost like a macrobiotic Japanese.

The American singer has turned vegan since 2013 and she believes in eating a plant-based and whole food diet that can expand your life and make you an all-around happy person. According to a report in BuzzFeed, she loves to eat bananas, tofu, tea, dragon fruit, beans, oatmeal, sweet potatoes and raw veggies.

Ariana presents tremendous energy when she is on stage and people generally talk about her energy and fitness levels while she is performing. She turned vegan in 2013 and since then she hasn’t turned back toward any animal-based products. She loves to eat almonds, cashews and protein bars whenever she feels the need to have a snack and energise herself. Celebrating her birthday, you must know all about the star’s preferences about how she maintains a healthy lifestyle.

(The above story first appeared on LatestLY on Jun 25, 2022 12:18 PM IST. For more news and updates on politics, world, sports, entertainment and lifestyle, log on to our website latestly.com).