"I'm your hope, you're my hope, I'm J-Hope," is the viral intro J-Hope gave himself, which perfectly captures his extroverted personality. He is an Aquarius, which is the perfect air sign to define his quirky, intelligent and eccentric nature. Talk about accurate astrology! 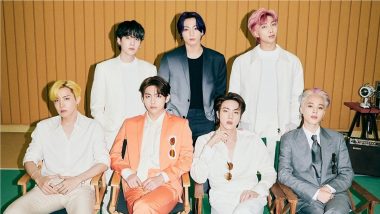 What's one thing you can find on every pre-teen's Instagram bio? If you guessed their zodiac, you are absolutely right! Mix that with being a fan of K-Pop hottest heartthrobs, and you've got a bunch of K-Pop fans begging to know if they are compatible with members of their favourite band, BTS! Are you one of those people? Don't be shy- we are too! ("Butter" has been going on in our heads on a loop, and we can't complain!). Today, we will discuss the zodiac signs of RM, Suga, Jimin, V, Jungkook, J-Hope and Jin. Stick around to see what the stars say about these K-Pop icons!

RM, aka Kim Namjoon, was born on the fine autumn day of September 12, 1994 (You'd think he was born in spring after he wrote a whole song about it, but no!) This would make sense for a lot of BTS fans since RM is a Virgo, and Virgos are ruled by the planet of communication- Mercury. This clicks immediately since RM is literally the translator for the rest of the boys during English-speaking interviews! BTS Style Guide: From BTS’ Jungkook to Suga; Take Fashion Inspiration from the K-Pop Artists to Revamp Your Wardrobe.

The mysterious Suga is a Pisces! (If you are surprised, you are not a fan. JK, but seriously Suga could be the poster child for Pisces) He was born on March 9, 1993. Pisceans are known for their vulnerable, empathetic and non-judgmental nature, and Suga exemplifies these qualities. For his 26th birthday, he literally donated $88,000 worth of meat and 329 BT21 Shooky dolls to the Korea Pediatric Cancer Foundation!

Jim was born on October 13, 1995, making him a Libra. Libras are known for their alluring charm, altruistic nature and elegance. This is because Libras are ruled by Venus, which is the planet of beauty and art. Jimin is literally known for his contemporary dance moves and elegant presence; what other sign could he possibly be? BTS for Louis Vuitton: The K-Pop Group Joins as the New House Ambassadors for LV! ARMY Go Crazy on Social Media.

Kim Tae-Hyung, better known by his stage name V was born on December 30, 1995, making him a Capricorn. V has a strong work ethic and undeniable charisma, which is the perfect juxtaposition for a Capricorn. There's a reason Jimin calls V his "alien" in their Map of the Soul: 7 duet, "Friends".

The Golden Maknae of the group, Jungkook, was born on September 1, 1997, and is one of the youngest members in the band. He has all the qualities of a Virgo, from his strategic approach to hard work to his multifaceted skillset- Jungkook has produced songs on BTS' albums, filmed videos for his Golden Closet Film YouTube series, directed BTS' "Life Goes On" music video, and even played the drums for a live performance of "Dynamite."

"I'm your hope, you're my hope, I'm J-Hope," is the viral intro J-Hope gave himself, which perfectly captures his extroverted personality. He is an Aquarius, which is the perfect air sign to define his quirky, intelligent and eccentric nature. Talk about accurate astrology!

Jin is fondly known as the funniest member on BTS, and now it can be proved since he is a Sagittarius! He was born on December 4, 1992. Sagittarius is ruled by the larger-than-life Jupiter, which provides a clear-cut example in Jin's outspoken personality and corny dad jokes. Seriously, he could be the new sign for Sagittarius!

(The above story first appeared on LatestLY on Jun 22, 2021 12:35 PM IST. For more news and updates on politics, world, sports, entertainment and lifestyle, log on to our website latestly.com).