Earlier this year, the Bajirao Mastani actress has graced the magazine covers of several international publications. 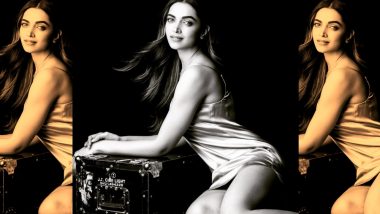 Just when we were wondering about Deepika Padukone whereabouts, her stylist Shaleena Nathani silenced our curiosity with a pic – just a still, but no ordinary one. The celebrity stylist took to Instagram to share a picture of the Indian actress at her seductive best! It’s a black and white photograph that has captured Deepika’s hot and cute personality to the perfection. Part of the Filmfare, leading entertainment magazine photo shoot, the 32-year-old is wearing a satin slip, just a satin slip to set the internet on fire. Deepika Padukone Looks Elegant As London’s Evening Standard Magazine Cover Girl! See Picture.

Post the release of Padmaavat in January 2018, Deepika has not signed up any new film. Well, it seems to have provided the Bangalorean beauty with a lot of time to indulge in other areas of interest like giving her best in the glamorous photo shoots. Remember, before becoming Bollywood’s reigning queen, she was a star runway model! In her latest project, Deepika has turned muse for Errikos Andreou, a celebrated and talented fashion and portrait photographer and videographer. Deepika Padukone Looks Beautiful on the She Canada Magazine Cover, Her Stern Message Should Not Be Missed.

Errikos posted a pic, the same still shared by Shaleena writing, “errikosandreouphoto#girlcrush @deepikapadukone for Filmfare. Styling by @shaleenanathani make up by @anilc68 hair by @yiannitsapatori”. Yes, like informed before it is a photo shoot done for Filmfare magazine. The photographer has given out the details of individuals responsible for getting Deepika ready with her hair, makeup and overall styling. And their efforts have paid off, as the B-town beauty looks like a million bucks.

Earlier this year, the Bajirao Mastani actress has graced the magazine covers of several international publications. We saw Deepika looking a stunner on London’s Evening Standard magazine cover. She had worn Rosetta Getty top and Victoria Beckham trousers to leave the fashion lovers speechless. Deepika was also the cover girl for She Canada magazine. Among her other high points this year, getting her wax figure at the Madame Tussauds in London and followed by in Delhi remains the biggest achievement.

(The above story first appeared on LatestLY on Jul 31, 2018 05:19 PM IST. For more news and updates on politics, world, sports, entertainment and lifestyle, log on to our website latestly.com).