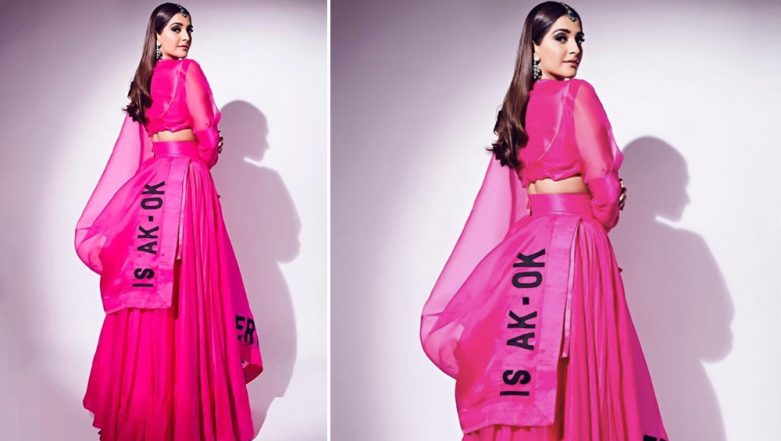 Diet Sabya takes a dig at Sonam Kapoor only to regret it later (Photo Credit: Instagram)

Unless you are living under the rock, you would be aware of Diet Sabya's existence. The virtual fashion police who's known for highlighting the fashion culprits and oppose blatant plagiarism makes headlines for all the right reasons. Trust it to bring some law and order in the fashion industry and designers should ideally wary about its sharp skills. While this online Instagram page often targets a bunch of Bollywood celebrities and Urvashi Rautela is one of its favourites, this time the attention was reserved for Anamika Khanna and Sonam Kapoor. Sonam Kapoor Makes Diet Sabya APOLOGIZE for Taking a Dig at Her Anamika Khanna Outfit.

Remember Sonam Kapoor's fuschia pink attire at Isha Ambani and Anand Piramal's grand wedding? Yea, the one that had 'IS AK-OK' printed on it. Well, the same design was accused by this hit Insta page for plagiarising the idea of Jordans. Vogue Magazine in June 2018 launched a new collection with the Jordan brand that had 'AWOK' written on his sole. Now Diet Sabya believed Anamika Khanna's AK-OK was a bit inspired by this AW - OK and honestly, we think it made no sense. Indian Idol 10 Judge Neha Kakkar Would Cry Buckets If She Saw Diet Sabya’s Latest Meme Featuring Kareena Kapoor Khan! (See Pic).

A screengrab of the post shared by Diet Sabya

However, Sonam Kapoor and Rhea Kapoor were in no mood to chill this time. While Rhea had already tried to correct this 'belief', Sonam was mighty disappointed with their 'culprit of the week.' She replied to Diet Sabya's post by saying 'Dear Diet Sabya, this is a bit of a reach on your part. I'm a bit disappointed. As a fan of your Instagram page, I hoped for better.' Now the actress is definitely not someone who loses her calm so easily and the post really bothered her for being unjust. She requested the page and the great mind behind it to come up with a better 'accused' next time and we totally second with her. And much to our surprise, Diet Sabya has now removed its post from its Instagram account. This is probably for the first time that it has regretted an accusation and we can already assume the actress dancing with joy.