For her makeup, she chose to go as minimal as she can. The actress often posts pictures of the makeup that she does for herself and all of it is now helping her glam up her face for the wedding. 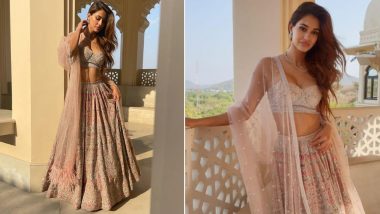 Disha Patani, who had been busy with the shoot of her upcoming projects, finally took a few days off of work to enjoy her childhood friend's wedding. The actress flew to the venue a few days back and has been sharing pretty pictures from the wedding celebrations. In a story posted on Instagram, the actress can even be seen grooving on dhol beats and his friend's baraat proceed to the wedding venue. Disha is having a lot of fun at the festivities but more than that we are not able to move on from her amazing ethnic outfits. Disha Patani Flaunts Her Love for Calvin Klein Once Again and All We Want to Say Is 'Oh No, Not Again!'.

The actress wore a pristine looking white ensemble for the baraat and then stunned everyone with her navy blue lehenga that she wore for another function. The actress has now shared a series of new pictures in yet another striking outfit that we need to take a note of. The actress opted for a lehenga in pastel pink colour. The blouse was studded with diamonds while the bottom was embellished with zari work in silver and red colour. The dupatta was also ornamented with silverwork and had ruffles on the hem. Disha looked like a goddess in the outfit.

For her makeup, she chose to go as minimal as she can. The actress often posts pictures of the makeup that she does for herself and all of it is now helping her glam up her face for the wedding. She opted for a matt base, brushed eyebrows, pink lipstick and a pink eyeshadow for her look. She added a diamond necklace, a silver bracelet and similar-looking statement earring to finish her look.

Workwise, Disha Patani has many projects at hand. She will next be seen reuniting with Salman Khan in Radhe: Your Most Wanted Bhai. The film is directed by Prabhudeva and will also feature Randeep Hooda essaying a pivotal role. The film is slated for a theatrical release on Eid this year. Disha had first featured alongside Salman in Bharat. She will also be reuniting with Mohit Suri for Ek Villain Returns after their successful collaboration for Malang. The makers are looking for a February 11, 2022 release date for the movie. Disha Patani Begins Shooting for Ekta Kapoor’s ‘KTina’.

The story of Ek Villain Returns is said to have two villains pitted against each other. Mohit Suri will be amongst the very few directors who will be working on a story where there are just two bad guys and no hero. John Abraham supposedly will also have a romantic arc. He will also be seen performing combat scenes and specialised action in the film. Apart from this, Disha will also be seen in KTina, produced by Ekta Kapoor. The film also features Akshay Oberoi and Sunny Singh.

(The above story first appeared on LatestLY on Feb 19, 2021 11:40 AM IST. For more news and updates on politics, world, sports, entertainment and lifestyle, log on to our website latestly.com).