Cristiano Ronaldo's beautiful girlfriend Georgina Rodriguez shared a set of pipin' HOT pictures on Instagram and fans cannot stop drooling. In the pictures, she wore sexy long overcoats seemingly without anything underneath flaunting her perky peaches. 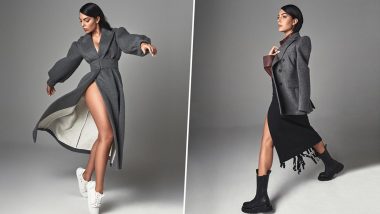 Cristiano Ronaldo's beautiful girlfriend Georgina Rodriguez shared a set of pipin' HOT pictures on Instagram and fans cannot stop drooling. In the pictures, she wore sexy long overcoats seemingly without anything underneath flaunting her perky peaches. Looking like million-dollar,  Rodriguez who is also one of the most popular celebrities on Instagram with a staggering 21.5million followers made her fans go crazy as they flood her post with appreciation. The post consisted set of four pics that displayed different styles. Right from sexy oversized coats to chic ones with layering and long floral gowns,  Georgina Rodriguez looks like a treat for the sore eyes. In the last picture, which was a close-up, she posed in a deep-neck knit top with stylish chain detail on the neckline.  Cristiano Ronaldo Reportedly Splurges £615K on Engagement Ring for Georgina Rodriguez, View Pics of The Happy Couple.

Just recently, she also posed for Vogue and in an interview claimed that nobody could have predicted her growth because she was the 'ugly duckling'. Rodriguez said to Vogue: "When I was little I was an ugly duckling and I have been turning into a swan. At birth, no one would have said that she would be beautiful later. They've always told me that [laughs]. I love myself as I am, with imperfections. Nobody is perfect. But we are unique. That is already special in itself."

Georgina and Ronaldo have two-year-old daughter Alana together and are raising his other three children - surrogate twins Eva and Mateo, three, and ten-year-old Cristiano Jr. Cristiano Ronaldo remains in isolation at home in Turin after having tested positive for covid-19. Dolores Aveiro recently revealed that CR7 is in the same house as his girlfriend, Georgina except in "separate spaces." "He is in the same house with Georgina and the boys, but in separate spaces and with great care," said the star's mother to Correio da Manhã to Daily Star.

(The above story first appeared on LatestLY on Oct 26, 2020 04:10 PM IST. For more news and updates on politics, world, sports, entertainment and lifestyle, log on to our website latestly.com).