The 78th annual Golden Globe Awards 2021 was held on February 28. This year while a few celebs attended the show from their home, whereas some made it to the red carpet. And so, here are our top seven best-dressed stars from the big night that were dressed to please. Check it out. 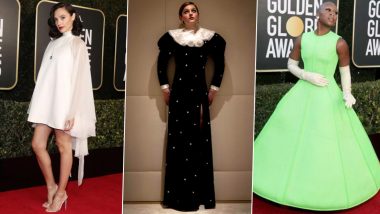 With COVID-19 still in the air, the awards show will never look the way it used to be. Having said that, on February 28, we witnessed the 78th annual Golden Globes Awards and as expected it turned to be a spectacular delight. While congratulations to the winner who took the trophy home, but we are here to discuss fashion. The night saw many Hollywood stars bringing their A-game on the red carpet. Yus, the style spirit of the stars was high even in such grim times and we are impressed. Golden Globe Awards 2021: Nomadland Gets Best Motion Picture - Drama, Chloe Zhao Wins the Best Director Honour.

Many celebrities made their mark by flashing some gorgeous attires on the big day. The show was hosted by the two women of Hollywood, Tina Fey and Amy Poehler, who were seen in all-black looks. However, we must admit that we missed Billy Porter giving is a gender-fluid style on the red carpet. Nonetheless, check out the best-dressed celebs below. Golden Globes 2021: Sacha Baron Cohen Takes Dig at Donald Trump During His Acceptance Speech (Watch Video).

Gal Gadot was the one who attended the awards show and opted for a mini dress in white that had a sheer thing going on the back of the outfit. With minimal accessories and red lip, the Wonder Woman flaunted a chic style on the red carpet.

Up next, we have Elle Fanning who looked like a modern-day princess in powder blue bodycon attire with a train detail, courtesy Gucci.

As per Regina King's caption on the post, she feels like a bottle of champagne and well we totally agree. As the Hollywood babe looked expensive and wow in her Louis Vuitton sequin one-shoulder dress.

Why should girls have all the fun? As Schitt's Creek star Dan Levy is also part of our best-dressed list. Firstly, we love the funky shade of his suit and further the idea to team it up with a sequined turtle neck by Maison Valentino underneath was a superb idea. Kudos to the stylist!

Emma Corrin served drama by flashing an attire by Miu Miu which was vintage at the same time modern. TBH, this extravagant bow dress is our favourite from the list. Golden Globes 2021: The Crown’s Emma Corrin Bags the Best Actress in a Drama Series for Her Portrayal of Princess Diana.

Andra Day looked spectacular on the Golden Globes red carpet as she went with an all-white ensemble by Chanel. The crochet detail is the winner here.

Last but not least is Cynthia Erivo who snatched the attention at the awards night by wearing a neon green structured gown along with a pair of white long gloves. And her silver heels, stunning. Have a look!

That's it, guys! These are the top seven favourite red carpet looks from the Golden Globes 2021, according to us. Some other stars who were dressed great include Tiffany Haddish, Amanda Seyfried, Kaley Cuoco and Sarah Hyland. What's your take on the above list? Tell us in the comment section below. Stay tuned!

(The above story first appeared on LatestLY on Mar 01, 2021 04:49 PM IST. For more news and updates on politics, world, sports, entertainment and lifestyle, log on to our website latestly.com).