Golden Globes 2021: The Crown’s Emma Corrin Bags the Best Actress in a Drama Series for Her Portrayal of Princess Diana

Actor Emma Corrin, the breakout star of the fourth season of Netflix's insanely popular series The Crown, took home the Golden Globe for best actress in a television series at the award show. 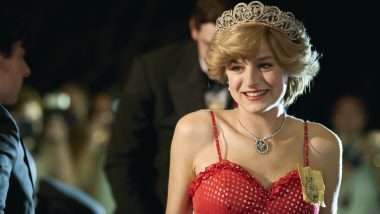 Actor Emma Corrin, the breakout star of the fourth season of Netflix's insanely popular series The Crown, took home the Golden Globe for best actress in a television series at the award show. The 25-year-old had received an overwhelming response for the uncanny portrayal of the late Princess Diana during her courtship and the early years of her marriage to Britain's Prince Charles. Golden Globes 2021: Jason Sudeikis Wins Best Actor Award – Musical or Comedy Series for Apple TV Show Ted Lasso.

Corrin also paid tribute to Diana during her acceptance speech, detailing the impact she has had on her life and career. "And most of all, thank you so much to Diana. You have taught me compassion and empathy beyond any measure that I could ever imagine. On behalf of everyone who remembers you so fondly and passionately in our hearts, thank you," Corrin said. Golden Globes 2021: Schitt’s Creek Wins Best TV Series -Musical/Comedy Award, Catherine O’Hara Bags the Best Actress Honour.

The 78th Golden Globe Awards is taking place nearly two months later than normal, due to the impact of the COVID-19 pandemic on cinema and television. This is the first bi-coastal ceremony, with Tina Fey hosting from the Rainbow Room in New York City, and Amy Poehler hosting from The Beverly Hilton in Beverly Hills, California.

The nominees for Golden Globes were announced on February 3 and Jane Fonda and Norman Lear were announced as the recipients of the Cecil B. DeMille Award and the Carol Burnett Award, respectively. Netflix dominated the nominations with a total of 42 mentions, including a nomination for the leading film 'Mank' and a nomination for leading television show 'The Crown'.'Mank' and 'The Crown' have received a total of six nominations each.