Grammys 2020: Joy Villa Turns Up Wearing a 'Trump 2020 - Impeached and Re-elected' Dress on the Red Carpet and Netizens Don't Know How to React (View Pics) 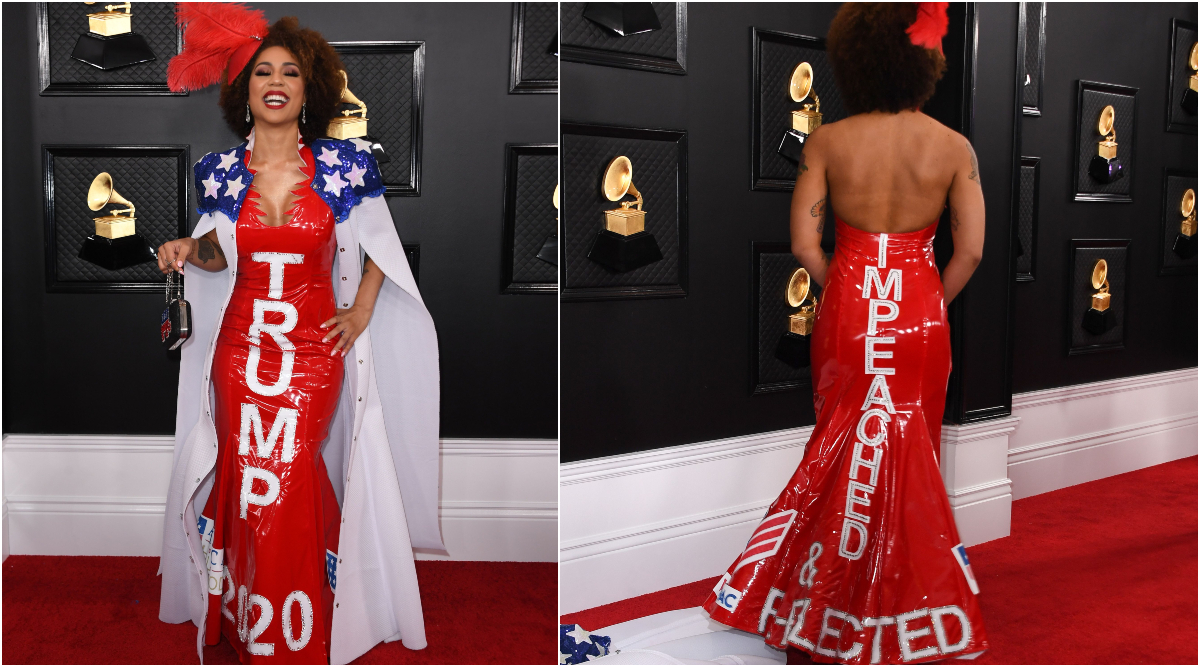 The 62nd Annual Grammy Awards took place in Los Angeles, Staples Centers on Sunday, January 26 night. The Recording Academy awards are the most coveted honours of the music industry and also an evening of fashion extravaganza, given that artists turn up sporting their best at the red carpet. This year's Grammys are going to be key for artists such as Lizzo who leads the most number nominations this year. As for the red carpet fashion, we have certainly been thrilled to see the likes of Ariana Grande, Billie Eilish and others spicing it up. Accompanying her husband Nick Jonas, actress Priyanka Chopra too stole the show with her super hot look. Although coming to disappointments, singer Joy Villa once again grabbed attention with her pro-Trump outfit.  Grammys 2020 Full Winners' List: Lizzo, Lil Nas X, Billie Eilish Bag Top Honours.

Villa showed at the Grammy Awards 2020 wearing a red, white and blue “Trump 2020” inspired dress. The gown had the words, “Trump 2020” in white running down the front of the bodice and the words “Impeached and Re-Elected” on the back. The gown was custom-made by Desi Allinger of Desi Designs. Before the event, Villa also told The Hollywood Reporter, "He’s going to be the first president in history to be impeached and re-elected.” As soon as pictures of Villa's dress hit the internet, netizens have been divided over her fashion. While Pro-Trump folks hailed her, it was many others who were confused as to who Villa is and commented calling it an attention-grabbing stunt.

Is it really the #Grammys without a pro-Trump fashion statement by #JoyVilla? She’s wearing a latex gown and red white and blue cape custom made by Desi Allinger of Desi Designs

The outfit certainly left netizens speechless although this is not the first time the 28-year-old singer has done this. Last year, Villa wore a border wall-inspired gown along with a red “Make America Great Again” purse also designed by Allinger.What do you think about Joy Villa's outfit? Do comment and tell us!