Halima Aden quits fashion industry. Through a series of Instagram stories, she highlighted the challenges she faced and how working in fashion has made her “compromise her religious beliefs,” particularly the way she wears a hijab. 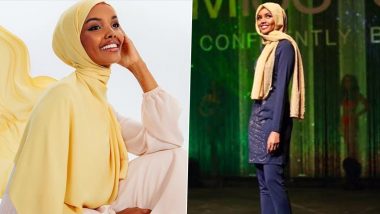 Halima Aden has opened up about her journey as being the first hijabi supermodel across the world. Through a series of Instagram stories, she highlighted the challenges she faced all these years and how working in fashion has made her “compromise her religious beliefs,” particularly the way she wears a hijab. This is why, the 23-year-old announced that she is quitting runaway. While, it has come as a huge blow to the fashion industry and also many women who look up to her, Aden apologised and explained what made her quit the industry, a career that she has always been so passionate about.

Aden has pioneered many firsts, including becoming top modelling agency IMG’s first hijabi model, first-ever hijab-wearing woman to compete in the Miss Minnesota pageant, and also the first to appear on the cover of Sports Illustrated’s swimsuit issue in a hijab and burkini. Her achievements in the modelling career have given her much recognition. She appeared on Vogue Arabia’s cover and in 2018, the Somali-American model made it to the cover of British Vogue, wearing a hijab, the first time in the magazine’s history.

In a series of deeply-candid Instagram stories, Aden explained the reason for her decision to quit the fashion industry. In one of the first posts, Aden shared an image of herself appearing in a campaign for Rihanna’s Fenty Beauty. She wrote, “This was my 1st ever fashion campaign & it was thanks to @badgariri sis let me wear the HIJAB I brought to set. This is the girl I'm returning to, The real HALIMA.” She continued in her message across several stories, including previous modelling photos, in which she claimed to have compromised on her beliefs.

“I wish I never stopped bringing my black hijab to set. Because the minute I got comfortable... let's just say I got too carried away,” she said. “I can only blame myself for caring more about the opportunity than what was actually at stake. I blame myself for being naive and rebellious. What I do blame the industry for si the lack of MUSLIM women stylists,” Aden added. She explained this had led to a very little understanding of the hijab within the fashion industry. In the other stories, she wrote about feeling the weight of being the most high-profile fashion model.

“Fellow Muslim sisters would send me DMs and even publicly tag me at the start of my career to say ‘stop dressing like an old woman’… which made me feel like I was doing something wrong … I remember wanting to be the ‘hot hijabi’ as if that didn’t just defeat the whole purpose,” read her Insta story.

In her closing thoughts, Aden acknowledged why she felt she had to conform to make it as a model in an industry that does not cater to hijabis. The Somali-American shot to fame in 2016 following her turn in the Miss USA beauty pageant, when she caught the eye of the French fashion editor, Carine Roitfeld.

(The above story first appeared on LatestLY on Nov 26, 2020 07:47 PM IST. For more news and updates on politics, world, sports, entertainment and lifestyle, log on to our website latestly.com).