Jennifer Lopez is on a roll and fans are beyond happy. The 51-year-old gorgeous singer who knows nothing about ageing just stripped naked for her new music video poster and it is probably the hottest thing you'll see today. 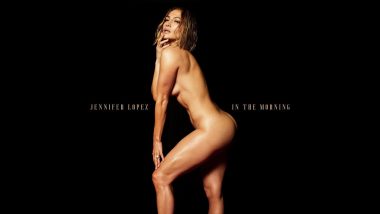 Jennifer Lopez is on a roll and fans are beyond happy. The 51-year-old gorgeous singer who knows nothing about ageing just stripped naked for her new music video poster and it is probably the hottest thing you'll see today. The super seductive 'In the Morning' poster is now going viral, no surprises there.  JLo is preparing for the release of her upcoming single In the Morning which she says will release this Friday BUT this cover is making fans impatient as they wait for the sizzling hot release. JLo knows exactly how to grab attention. Some of the sexiest bikini pics of Jennifer Lopez are proof that the HOT diva Is aging in reverse,   and now this naked pic is just reinstating our belief!

Raising the temperature with her latest social media post, JLo decided to bare it all except for the out of the world wedding ring given to her by fiancée Alex Rodriguez. The singer went for nude makeup, keeping it real with short hair in wet waves. JLo looks seductively at the camera as she creatively hides her intimate parts.  10 of the Most Outrageously Sexy Attires She Has Ever Donned - View Pics.

The caption along the picture reads, "Surprise! Here’s the official cover art for #InTheMorning Single drops Friday." The comment sections are flooded with compliments as fans call them "goddess", "queen". "legend" etc. Check out the super hot post:

JLo was recently named the People’s Icon of 2020 at the E! People’s Choice Award.  Amid accusations of copying Beyoncé at the AMAs, JLo teased a new song ‘In the Morning’ right before this poster on Instagram.  The pop star posted a series of photographs captured by Mert Alas posing completely nude while holding her boobs with her hands.  Jennifer Lopez recently found herself in the middle of accusations that she copied Beyoncé from her  2014 Grammys performance with her husband, rapper Jay-Z at the American Music Awards.

(The above story first appeared on LatestLY on Nov 26, 2020 06:24 PM IST. For more news and updates on politics, world, sports, entertainment and lifestyle, log on to our website latestly.com).