The choice of jewellery, which Sonam has accessorised with the gown from the fashion designer graduated from FDC Egypt also demands our attention. 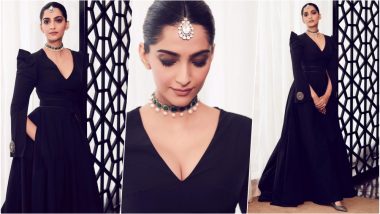 Bollywood actress scores high on our fashion meter with her back-to-back resplendent avatars. The 33-year-old who had us in awe of her billowy shirt gown from Danielle Frankel at a Chopard event on Tuesday, is back with another jaw-dropping fashion moment. Sonam who is in Doha to attend the opening ceremony of National Museum of Qatar, decked up for the prestigious occasion. She chose a regal Marmar Halim gown to grace the special event. Her sister and stylist, Rhea Kapoor, as well as Marmar Halim, shared pics of Sonam on their Instagram handles respectively. Hot Expensive! Sonam Kapoor Gives Major Summer Style Goals in This £5,360 White Danielle Frankel Shirt Gown (View Pics).

Rhea writes, “@sonamkapoor in Doha today for the opening of the @nmoqatar @fashiontrustarabia #fashiontrustarabia.” It is a big event as the National Museum of Qatar (NMoQ) is set to open its doors to the public on Thursday. Sonam is one of the VIP guests to attend the opening ceremony where Tamim bin Hamad Al Thani, Emir of Qatar will officially do the honours. Sonam Kapoor in Calvin Klein Pantsuit and Mark Bumgarner Dress Is Every Fashion Lover’s Dream (See Pics).

Sonam who is known as the true-blue fashionista of Indian film industry strikes a right balance between classy and chic at the event. It is a black gown from the fashion label’s fighter collection, featuring a plunging neckline, draped sleeves that has hand embroidery and a high waist hem and pockets, which makes the dress classical and yet in vogue.

The choice of jewellery, which Sonam has accessorised with the gown from the fashion designer graduated from FDC Egypt also demands our attention. The Ek Ladki Ko Dekha Toh Aisa Laga actress is wearing a diamond-studded maang tika by her mother, Sunita Kapoor. Apart from this beautiful head jewel, Sonam is also wearing a green-white pearl choker from Amrapali Jewels. The actress looks like a modern-day queen in every frame.

More Pics of Sonam Kapoor Ahuja From The Event

@fashiontrustarabia @nmoqatar thank you for a spectacular evening and such splendid hospitality..

As for the event that Sonam is attending, the opening of the National Museum of Qatar is a historic event. Designed by Jean Nouvel, the Pritzker Prize-winning French architect, the multifaceted structure resembling a giant desert rose sits across from the bustling Doha Corniche, the main waterfront promenade in the Qatari capital. "Culture connects people, and with this new museum we believe we had created an exceptional platform for dialogue," said Sheikha al-Mayassa bint Hamad bin Khalifa Al Thani, the head of the Qatar Museums Authority.

(The above story first appeared on LatestLY on Mar 27, 2019 11:02 PM IST. For more news and updates on politics, world, sports, entertainment and lifestyle, log on to our website latestly.com).