Hailey Bieber has taken to her Instagram handle to share a few stunning pictures from her latest Vogue photoshoot. With the latest pictures, the 24-year-old model is giving us major summer beach fashion goals. 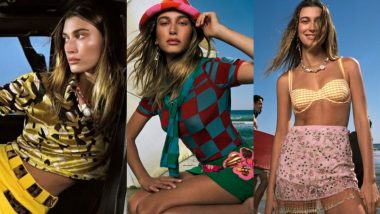 When it comes to fashion, Hailey Bieber is always ahead of the game. Hailey knows to nail any look with utter grace. She is one of the sought-after models across the globe. From hanging with BFFs Kendall Jenner and Gigi Hadid to making a stunning appearance on red carpets, she makes sure to catch eyeballs. By wearing unique ensembles, Hailey always keeps the paparazzi busy. Recently, the gorgeous model will be featured in Vogue’s June/July issue. She has now taken to her Instagram handle to share a few pictures from her latest Vogue photoshoot.

In the pictures, Hailey can be seen showcasing various summer beach dressing styles. According to Vogue magazine, “She’ll wear a preppy gingham bikini, but she’ll pair it with a bohemian beaded skirt. And in lieu of a linen cover-up, Bieber reaches for a graphic checkerboard tee that bursts with colour.” In the pictures, Hailey can be seen flaunting her no-makeup look and wavy hair. She has accessorised her looks with summer camp-like jewelleries and knitted hats.  Hailey has donned summer beach-friendly classics like straw hats, kaftans, and colourful checkered ensembles.

On the personal front, Hailey Baldwin and Justin Bieber got married secretly in a courthouse in New York in 2018. In 2014, they had started dating each other; however, they had been friends since their teenage days.

A few months back, talking about her marriage with Justin, she told ELLE magazine, “I mean, I was married when I was 21, two months before I turned 22, which is insanely young. And sounds almost ridiculous when you say it out loud. Although I do think for somebody like me and somebody like Justin, [it’s different]. We’ve seen a lot for our age. We have both lived enough life to know that’s what we wanted.”

Hailey Bieber has a massive fan following on Instagram. In March, she had launched her own YouTube channel, Hailey Rhode Bieber.

(The above story first appeared on LatestLY on May 28, 2021 02:20 PM IST. For more news and updates on politics, world, sports, entertainment and lifestyle, log on to our website latestly.com).