Sunny was stepping out for an event and she opted for a high-slit white dress for her arrival. The dress was by couturier Swapnil Shinde from his SS 20 “not the cool girl” collection. 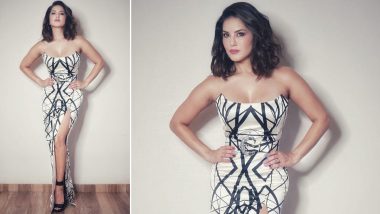 Sunny Leone always sets the bar high when it comes to flaunting the curves. The actress loves to dress up and share her lovely pictures with the fans. Sunny is finally back to work and recently shared a sultry picture wearing a high slit dress and it is surely raising is raising the temperature. The actress who will be seen as a host on MTV Splitsvilla X3 also added a very witty caption with the picture as well that you don't want to miss. MTV Splitsvilla X3: Auditions of Sunny Leone, Rannvijay Singha’s Reality Show to Go Virtual for the First Time.

Sunny was stepping out for an event and she opted for a high-slit white dress for her arrival. The dress was by couturier Swapnil Shinde from his SS 20 “not the cool girl” collection. The dress had a plunging neckline and works with black on it. Sunny added a pair of black heels and customised accessories by Avani Gujral. Her makeup was also on point. She went for a pink lip shade, matt base and smokey eyeshadow to add drama to her look.

Talking about returning to MTV Splitsvilla X3, Sunny revealed, “Every season, the journey of Splitsvilla unfolds in a refreshingly different way for me. Not only do I meet new people, but I also get to experience and work around newer themes and formats. This year is no different, despite the challenges. With digital becoming the way of life, the Live auditions are a first for me and I’m really excited to be a part of this format.” Sunny Leone or Sara Ali Khan, Who’s Pretty Marathi Mulgi Look Set Your Heart Racing?

The team organised online auditions for this season on December 12 and 13. The next round of auditions will take place today and December 20 on Facebook, Twitter and YouTube page of MTV India and also on VOOT. Sunny will be accompanied by judge and co-host Rannvijay Singh for this season as well.

(The above story first appeared on LatestLY on Dec 20, 2020 01:52 PM IST. For more news and updates on politics, world, sports, entertainment and lifestyle, log on to our website latestly.com).