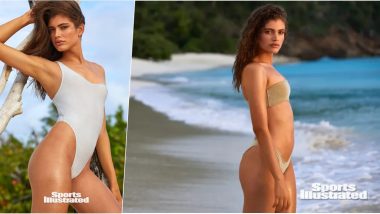 Valentina Sampaio, the 23-year-old is making her Brazilian roots proud and how. Brazil has given us supermodels such as Gisele Bündchen, Alessandra Ambrosio, Adriana Lima, and so many more. And joining the big league is Aquiraz-born, Valentina. She has been on a roll, scripting history like a boss. After becoming Victoria's Secret first trans-model last year, Valentina Sampaio sets a record by featuring as Sports Illustrated's first transgender swimsuit model. This is the first time in prestigious sports magazine's 66 years (it was set up in 1954), that they have a trans model gracing their pages. Valentina's bikini-clad photos and videos from the glam photoshoot are all over the internet, and everyone seems mesmerised by them (ignore the transphobic haters and trolls, they don't count).

Sports Illustrated tweeted a picture of bombshell Valentina looking gorgeous in a one-shouldered white monokini on their official handle. They captioned it as - Meet the Rookies: Valentina Sampaio. It had a link back to an interview with the beauty in the limelight. One of the Q&A from the interview that caught our attention was this, which reads: "Looking back, what advice would you give to your 14-year-old self?" To this, Valentine replied, "To be strong and mature. To understand that there are situations that will be especially challenging because I don't yet have the life experience to handle them with ease. To not feel "wrong" for being who I was born as. To not feel shame or fear for being trans." True that, woman. You can find more such gems by reading the full interview here.

Valentina has been receiving love from all the quarters. Of course, there will be haters, there will be people who just cannot let the humans be. There are transphobic trolls out there, and many have tried their level best to spread hatred and filth under SI's announcement tweet for Valentina Sampaio. But TBH, love, respect, and compassion win, always.

Valentine too took photo-sharing platform, Instagram, to share the big news. She writes, "I am excited and honored to be part of the iconic Sports Illustrated Swimsuit Issue. The team at SI has created yet another groundbreaking issue by bringing together a diverse set of multitalented, beautiful women in a creative and dignified way."

The post continues to read, "I was born trans in a remote, humble fishing village in northern Brazil. Brazil is a beautiful country, but it also hosts the highest number of violent crimes and murders against the trans community in the world—three times that of the U.S."

"Being trans usually means facing closed doors to peoples’ hearts and minds. We face snickers, insults, fearful reactions and physical violations just for existing. Our options for growing up in a loving and accepting family, having a fruitful experience at school or finding dignified work are unimaginably limited and challenging. 💜🧡💛❤️💚" And on that very note, let us check out some very gorgeous pics and videos of Valentina Sampaio looking absolutely stunning.

Born on December 10, 1996, in Aquiraz, Ceará, Brazil, Valentina became Victoria's Secret's first openly transgender model in August 2019. In 2017, Sampaio became the first transgender model to feature on a Vogue cover, when she appeared on the front of the French edition. She is a model and actress. Her father is a fisherman, while her mother worked as a schoolteacher. In a 2017 New York Times profile of Sampaio mentioned that her parents "were always supportive and are very proud" of her, though Valentina has been open about how trans people face insults and attacks in her home country. "I recognise that I am one of the fortunate ones, and my intention is to honour that as best I can," she said. Well, Valentina Sampaio is living up to her promise.

(The above story first appeared on LatestLY on Jul 11, 2020 11:12 AM IST. For more news and updates on politics, world, sports, entertainment and lifestyle, log on to our website latestly.com).