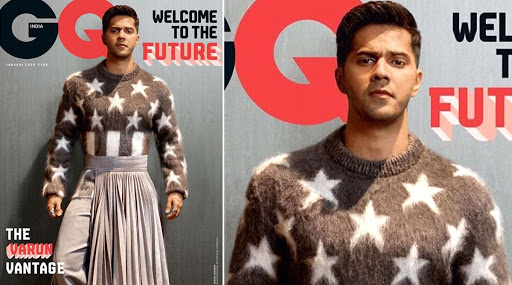 Varun Dhawan is presently holidaying with his ladylove Natasha Dalal at the Swiss Alps. But that doesn't mean he isn't teasing his fans with some cool stuff. Varun takes the cover of GQ India's January issue with a hint of Captain America. Now he has a connection with the First Avenger. He had voiced him for the Hindi dubbed version of Captain America Civil War. Although there are no blue and red hues to his garb, when you see it you will know what we are saying. Anushka Sharma-Virat Kohli, Varun Dhawan-Natasha Dalal, Saif Ali Khan-Kareena Kapoor Khan Pose For a Starry Frame Giving us K3G Feels!

But what is more interesting is the blurb or the short summary of what to expect from the interview in the issue. It says The Varun Vantage. Now, Vantage means a position giving a strategic advantage, commanding perspective, or comprehensive view or superiority in a contest, as per Merriam-Webstar. So it seems the actor is aiming for a superior positioning this year, perhaps at the box office with Street Dancer 3D. We can guess, you see!

Street Dancer 3D is releasing on January 24 and is looking to cash in on the Republic Day holiday. The film has created some stir but it isn't as hyped as the ABCD series. However, Varun has a legion of fans who are waiting for him to burst into the big screens. Guess that will help him 'Welcome The Future' on a great note.