Alvida Jumma 2020, Eid Namaz: How to Perform Friday And Eid-al-Fitr Prayers at Home During Lockdown, Fatwa And Guidelines Issued

In the context of Alvida Jumma and Eid prayers, Shahi Imam of Lucknow's Eidgah, Maulana Khalid Rasheed Farangi Mahli has issued a fatwa and guidelines. 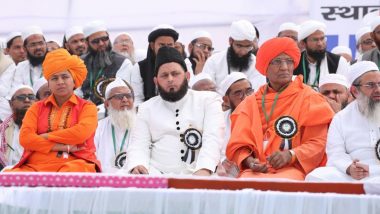 New Delhi, May 22: Muslims in India are observing Jumu'atul-Wida or Alvida Jumma today, while Eid or Eid-al-Fitr festival will either be celebrated on May 24 or May 25 depending upon the moon sighting. As the entire nation is under lockdown due to the coronavirus outbreak, mosques are shut across the country. In the context of Alvida Jumma and Eid prayers, Shahi Imam of Lucknow's Eidgah and Executive Member of the All India Muslim Personal Law Board, Maulana Khalid Rasheed Farangi Mahli has issued a fatwa and guidelines, urging Muslims to pray at homes. Jumu'atul-Wida 2020: Know Meaning of Jumma Tul Wida, Significance of 'Alvida Jumma' And 'Alvida Ramzan' Ahead of Eid-al-Fitr.

Through his fatwa, Maulana Khalid Rasheed Farangi Mahli has asked Muslims not to visit mosques for offering prayers on the occasion of Jumu'atul-Wida and Eid. Here it may be noted that Jumu'atul-Wida means the last Friday of the holy month of Ramadan. The day is also called Alvida Jumma or Alvida Ramzan as it marks the culmination of the month of Ramzan. Maulana Khalid Rasheed also listed steps to offer prayers for Alvida Jumma and Eid-ul-Fitr at home during the nationwide lockdown. Alvida Ramzan 2020 Wishes: WhatsApp Status Messages, HD Images, Wallpapers, Facebook Greetings and Alwida Mahe Ramzan SMS to Send on Jumma Tul Wida Ahead of Eid ul-Fitr.

"Offer Ramadan’s last Jumma prayers, Alvida namaz at home with 4-5 people collecting together to form a jamaat (congregation) while only those who stay in the masjid will offer Alvida namaz there. In these last few days of Ramadan, do not loiter out for shopping unless there is an emergency,” Maulana Khalid Rasheed told a news portal. "If four or more men are at home, one can lead the prayers. In case of fewer than four members present in the house, shukrana namaz can be held," he added.

The cleric-cum-Islamic scholar said the same should follow on the occasion of the Eid festival. "Only those 4-5 people who stay in the mosques, will be offering Eid namaz inside it. Rest, all the other Muslims are advised to offer Eid namaz at their respective homes," he was quoted as saying. Since khutba is also mandatory for Jumma and Eid prayers, the Islamic Centre of India has released a short clip of the same. Khutba is a religious lecture which is delivered by Imam during Friday and Eid's prayer.

It is mandatory to listen to the khutba for all those who attend the prayer. Without khutba, prayers cannot be held for Jumma and Eid. "People can open it (khutba) from our website and read it out directly," Maulana Khalid Rasheed said.

(The above story first appeared on LatestLY on May 22, 2020 11:25 AM IST. For more news and updates on politics, world, sports, entertainment and lifestyle, log on to our website latestly.com).