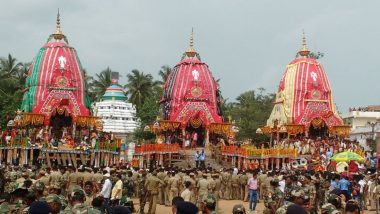 The Jagannath Rath Yatra that began on June 23 will culminate today by following a number of rituals and customs. The events will see Lord Jagannath's homecoming to Puri temple in Odisha. The return journey is a procession filled with customs and traditions called the Bahuda Yatra. Every year thousands across the globe come together to attend the event. However, as this year, there are restrictions due to COVID-19 pandemic, we bring to you Bahuda Yatra of Lord Jagannath 2020 free live streaming which you can watch online. Watch the live video to see the procession being carried out with varying cultural performances, customs, traditions and practices. On Devsshayani Ashadhi Ekadashi day, Lord Jagannath along with his brother Balbhadra and sister Subhadra shall begin their return journey from the Gundicha temple. Jagannath Rath Yatra 2020 HD Images & Wishes: Sudarsan Pattnaik Creates Beautiful Sand Art Celebrating The Annual Procession at Odisha' Jagannath Temple in Puri (Pictures And Video)

According to the schedule released by the Shree Mandir (Puri Jagannath Temple) administration, the Bahuda Pahandi began at 8 am and continue upto 10 am. The live telecast shall then show the Chera Panhara between 10:30 am and 11.30 am, following which the Bahuda Yatra shall start around noon. Jagannath Rath Yatra 2020: History and Significance of Puri's Annual Chariot Festival.

During Bahuda Yatra, on the day of the return journey, the Mangal Aarti takes place as early as 4 am, which is then followed by the Maellam. This ritual is followed by the Tadap Lagi and Rosa Homa. Abakash is conducted in around 30 minutes which is followed by the Puja of Surya Dev. Ahead of the yatra, the gatekeepers of the Lord are also worshipped, which is a part of the ceremonies. After this, the Dwarpala Puja is performed, followed by the Gopal Ballav and Sakala Dhupa for almost an hour. The Senapatalagi begins after these ceremonies.

Meanwhile, all the rituals and chariot pulling is conducted by servitors who have been tested negative for COVID-19. ON July 23, over 5,000 people including 3,000 servitors, police personnel and journalists participated in Rath Yara. Before and after the event they were all tested and found negative.

(The above story first appeared on LatestLY on Jul 01, 2020 09:08 AM IST. For more news and updates on politics, world, sports, entertainment and lifestyle, log on to our website latestly.com).