Chaitra Navratri 2020 also called as Vasanta Navaratri will be marked from March 25 to April 3 this year. All the nine days sees the worship of Goddess Maa Durga, the supreme goddess of Shakti. The ninth day which is Navami, celebrates another important festive occasion of Ram Navami, the birth of Lord Rama. 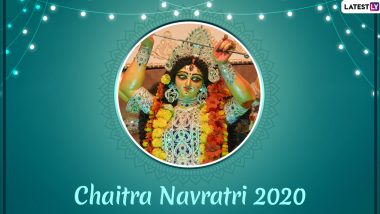 Whenever you hear of Navratri, you think of the nine-day celebrations which precede the festival of lights 'Diwali.' But that is not the only Navaratri marked in India. The festival of Chaitra Navaratri, which is celebrated in the spring season is soon approaching. Chaitra Navratri 2020 also called as Vasanta Navaratri will be marked from March 25 to April 3 this year. All the nine days sees the worship of Goddess Maa Durga, the supreme goddess of Shakti. The ninth day which is Navami, celebrates another important festive occasion of Ram Navami, the birth of Lord Rama. This entire festival is very significant because it marks the beginning of the new year in the Hindu Calendar. New year day is observed in different ways in different states. Ahead of Chaitra Navratri 2020, we tell you some more details about the dates, calendar, and significance of the celebrations. March 2020 Fasts, Festivals, Events and Holiday Calendar: Holi, International Women’s Day, Chaitra Navratri; Know List of All Important Dates for the Month.

Chaitra Navaratri is celebrated during the Shukla Paksha of the Chaitra month. It thus usually falls between the Gregorian calendar months of March- April. This year, Chaitra Navratri will begin from March 25, 2020 and go on until Dashmai which will be marked on April 3. Both the first day and the last day of Chaitra Navratri celebrate significant festivals of Gudi Padwa, Ugadi (beginning of Hindu Calendar) and Ram Navami respectively. April 3, marks the Dashami which is the tenth day of celebration.

Navaratri means 'nine nights.' During these nine nights, nine forms of Goddess Durga are worshipped. Chaitra Navaratri celebrates the arrival of the spring season. The festival is mostly about celebrating Shakti or the Supreme Goddess. Since the birth of Rama also falls in the festivities, it is also called as Rama Navratri. The celebrations are very similar to those of Sharad Navratri, which is marked in the latter part of the year. Devotees go to Durga Maa temples, offer their prayers and seek blessings from her. All nine forms of Durga Maa – Goddess Shailaputri, Goddess Brahmacharini, Goddess Chandraghanta, Goddess Kushmanda, Goddess Skandamata, Goddess Katyayani, Goddess Kaalratri, Goddess Mahagauri will be worshipped throughout these days. The Navami however, will see the worship of Lord Rama, as it celebrates the birth of the great Lord.

Besides, Chaitra also sees the blossoming of nature everywhere, it signifies the arrival of spring. Durga Maa, the Shakti is prayed at this new beginning. The beginning of Chaitra Navratri on March 25, also marks the celebration of festivals like Gudi Padwa in Maharashtra, Ugadi in Andhra Pradesh and Tamil Nadu and Telangana. So it is a festive time in the country.

(The above story first appeared on LatestLY on Mar 11, 2020 02:01 PM IST. For more news and updates on politics, world, sports, entertainment and lifestyle, log on to our website latestly.com).