Cheti Chand is an auspicious and grand celebration for Sindhis across the world and will be celebrated on March 26 this year. Know Cheti Chand significance, history and celebrations associated with the Sindhi New Year to mark Jhulelal Jayanti. 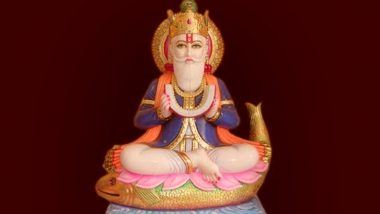 As mentioned, Cheti Chand is celebrated on the first day of Chet month in the Hindu lunisolar calendar. It traditionally falls in March or April in the Gregorian calendar. Cheti Chand 2020 will be commemorated on March 26.

History and Significance of Cheti Chand

Not only does Cheti Chand mark the beginning of the Sindhi New Year but it also marks the birthday of Sindhi Patron Saint Jhulelal. It is believed that Jhulelal was born to save Sindhis from persecution by the tyrannical Muslim ruler Mirkhshah. His birth played a key role in preserving and taking forward the Sindhi traditions and mythology. It is believed that people prayed to Lord Varun Dev, who saved them through Jhulelal. The interesting part of this folklore is that He is not only worshipped by the Hindu Sindhis but also revered by the Sufi Muslims of Sindh, as "Khwaja Khizir" or "Sheikh Tahit".

How is Cheti Chand Celebrated?

Cheti Chand celebrations are significant for Hindu Sindhis. On this day, they take Baharana Sahib, a representation of Jhulelal, to a nearby river or lake. This construction consists of a lamp, misiri (crystal sugar), fota (cardamom), fal (fruits), and akha placed behind a kalash with coconut. It is covered with a cloth and decorated with flowers and leaves. The Baharana Sahib also has a Murti (statue) of Pujya Jhulelal Devta.

Cheti Chand is a major festival for Hindu Sindhis across the world. Sindhis are known initially as the socio-ethnic group originating from the Sindh Province, which is now in Pakistan. This festival is a grand celebration of their tradition and religion and brings together all the Hindu Sindhis diaspora. We hope that this Cheti Chand brings in an array of positivity and happiness into your life. Happy Cheti Chand.

(The above story first appeared on LatestLY on Mar 25, 2020 02:21 PM IST. For more news and updates on politics, world, sports, entertainment and lifestyle, log on to our website latestly.com).