Hajj 2022 Start Date and End Date: Know Rituals, Rites of Hadj, History and Significance of One of the Five Pillars of Islam

The Hajj ritual can be traced back to the time of the Prophet Abraham, which is considered one of the five pillars of Islam. The pilgrimage rite begins on the 7th day of Dhu al-Hijjah, the last month of the Islamic year and ends on the 12th day. 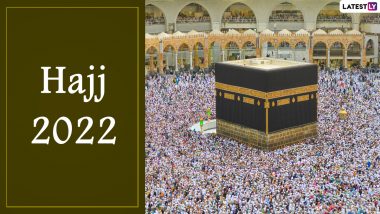 Hajj, sometimes spelt as Hadj, Hadji or Haj in English, is one of the fundamental pillars of Islam. In Muslim terminology, Hajj is the annual pilgrimage to the Kaaba known as the "House of God" in the sacred city of Mecca in Saudi Arabia. The dates of the Hajj pilgrimage vary each as per the Islamic calendar. The mandatory religious duty is performed over five to six days, extending from the 8th to the 12th or 13th of Dhu al-Hijjah, the last or twelfth month of the Islamic Hijr calendar. Hajj 2022 will begin on the 8th of Dhul Hijjah. This year, it is expected to begin on Thursday 7th, July 2022. Millions of white-robed worshippers from across the sphere pack the streets of Mecca to attend the biggest pilgrimage with utmost faith and optimism. Every adult Muslim who is physically or financially capable of affording the pious journey must mark the religious event at least once in their lifetime. Hajj Mubarak 2022 Wishes & HD Images: Send WhatsApp Messages, Telegram Quotes, Wallpapers & SMS to Your Relatives on the Annual Islamic Pilgrimage.

History And Significance Of Hajj

The yearly Hajj procession is associated with the life of the Islamic prophet Muḥammad ibn Abd Allah. But now, people practice the Hadj rituals in Mecca to commemorate Abraham's story. As said in the Islamic tradition, God ordered Abraham to leave his wife Hajar and his son Ismail alone in the desert of ancient Mecca. Hajar went in search of water, ran desperately seven times between the two meaningful hills of Safa and Marwah, and left empty-handed. When Is Eid al-Adha 2022? Get To Know Bakra Eid or Bakrid Traditions, Origin and Significance of Celebrating the Islamic Festival.

The despair Hajar saw his baby Ismail scratching the ground with his leg when a water fountain sprang forth underneath his foot. After which Ibrahim was commanded to build Kaaba, which he did with the help of Ismail. He was asked to invite people to perform the pilgrimage at the site. It is said that the archangel Gabriel brought the Black Stone from Heaven to be attached to the Kaaba. The rites of Hajj are divided into several parts. It begins on the official day of the auspicious occasion, followed by the Day of Arafat, when pilgrims leave Mina for the 14.4km journey to the plain of Arafat. After which falls Eid al-Adha, when people return to Mecca and perform symbolic rites in which pebbles are thrown at pillars that represent the temptations of Satan. The sacrament ends on the final day of Hajj.

(The above story first appeared on LatestLY on Jul 05, 2022 04:00 PM IST. For more news and updates on politics, world, sports, entertainment and lifestyle, log on to our website latestly.com).