Hanuman Jayanti is one of the most popular Hindu festivals. Hanuman Jayanti celebrates the birth anniversary of Lord Hanuman. According to the Hindu calendar, Hanuman Jayanti occurs every year on Chaitra Purnima and this year it will be observed on April 8, Wednesday. On the occasion of Hanuman Jayanti 2020, Here are some famous temples of Bajrang Bali in India And Abroad. 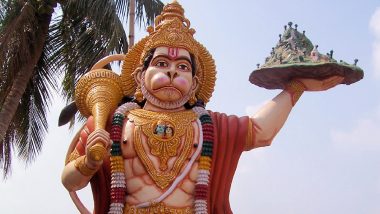 Hanuman was an absolute devotee of Lord Rama. He was born to Anjana- the wife of Vanaraja Kesari (the King of Monkeys). Anjana was cursed by Muni Vishwamitra that she will give birth to a monkey. To get rid of the curse, Anjana started worshipping Lord Shiva and urged him to be part of her son. Thus, it is believed that Lord Hanuman is an incarnation of Lord Shiva. On Hanuman Jayanti 2020, here is a list of famous Bajrang Bali temples. Hanuman Jayanti 2020 Wishes: WhatsApp Stickers, HD Images of Bajrangbali, Facebook GIF Greetings, Messages and SMS to Celebrate Lord Hanuman’s Birth.

Famous Temples of Lord Hanuman in India And Abroad:

The Hanumangadhi temple is one of the most famous Lord Hanuman temple in the world. It is situated in Uttar Pradesh's Ayodhya city. To reach the temple, people have to climb 76 stairs. According to legends, the place where the Hanumangadhi now stated was inhabited by Bajrang Bali.

Balaji Hanuman temple is located in Rajasthan's Dausa district. The three main deities worshipped here are Lord Hanuman, Pret Raj (King of Spirits) and Bhairav. The temple has an idol of Lord Hanuman with a round face, moustache and beard.

Known as Hanuman Dhoka, a huge orange vermillion coated statue of Lord Hanuman stands at the entrance of royal palace in Nepal's Kathmandu. The statue was built in 1672.

Hanuman Temple in Delhi's Connaught Palace is believed to one of the five temples of Mahabarata days. The temple has a self-manifested idol of Bajrang Bali and worshipped as "Sri Hanuman Ji Maharaj."

With the main deity standing at a whopping 85 meters, Lord Hanuman Statue in Trinidad's Carapichaima is the largest Hanuman statue outside India. The massive statue stands right adjacent to Dravidian-style temple. The temple has become one of the major tourist attractions in Trinidad.

(The above story first appeared on LatestLY on Apr 08, 2020 09:00 AM IST. For more news and updates on politics, world, sports, entertainment and lifestyle, log on to our website latestly.com).