Helen Keller 140th Birth Anniversary: 16 Incredible Facts About the Deaf-Blind American Author That Will Inspire You to Achieve Your Dreams Despite All Odds

Helen Keller, an American author of immense repute remains one of the most inspirational figures in modern history owing to the immense positivity she showed in life despite suffering from a disability. Remembering her on the 140th birth anniversary, here we look at 16 incredible facts about Helen Keller that will inspire you to achieve your dreams despite all odds. 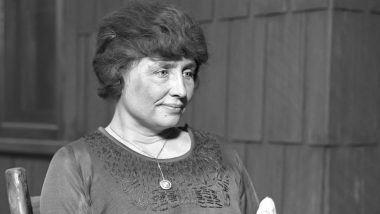 Helen Keller, an American author of immense repute remains one of the most inspirational figures in modern history owing to the immense positivity she showed in life despite suffering from a disability. It is her 140th birth anniversary today, June 27. A possible Scarlet fever left a 19-year-old Helen Keller deaf and blind, but her life took a turn for the good when a 20-year-old teacher – Anne Sullivan entered her life. Under her constant guidance, Helen Keller learnt Braille and quickly completed her education. She started writing about blindness which was unheard of in those days. Helen Keller spoke immensely about the rights of the deaf and blind person and also founded an organisation that worked for their upliftment. She remained an active member of the Socialist Party of America and took up the cause of women empowerment, socialism and labour rights. Remembering her on the 140th birth anniversary, here we look at 16 incredible facts about Helen Keller that will inspire you to achieve your dreams despite all odds. What is Deafblindness? Know More About the Day That Aims to Help the Deaf-Blind Thrive in the Workplace.

1. Helen Keller was born on June 27, 1880, in Tuscumbia, Alabama, USA. Her father, Arthur Keller, was a captain in the Confederate army and post the civil war he edited the local newspaper – The North Alabamian.

2. After becoming dead and blind as an infant, Helen Keller’s transformation into childhood saw her becoming rude and wild.

3. After Alexander Graham Bell examined a six-year-old Helen Keller, he sent to her a 20-year-old teacher, Anne Sullivan. She was from the Perkins Institution of Blind in Boston.

4. Anne Sullivan believed it was essential to discipline Helen Keller with love and without crushing her essence. She lived with the young child for two weeks in a cottage away from her main house.

6. In 1890, Helen Keller was taken to Sarah Fuller of the Horace Mann School for the Deaf and Hard of Hearing in Boston. She gave her 11 lessons which Anne Sullivan later taught her.

7. She joined the Cambridge School of Young Ladies to prepare for Radcliffe College in 1898 and was able to enrol herself successfully in the latter in 1900.

8. Helen Keller became the first blind person to have a Bachelor of Arts degree when she graduated in 1904 from Radcliffe College.

9. Helen Keller’s autobiography, The Story of My Life was published in 1903 when she was still a student. It has been translated into 50 languages and is immensely popular even today.

10. Her archives include 475 speeches and essays covering a wide range of topics likes faith, racism, birth control and many more.

11. Helen Keller fought actively for worker’s right as she had strong socialists ideals. She also protested US involvement in World War 1.

12. Helen Keller joined the American Foundation for the Blind in 1924 and worked there for 40 years.

13. She became the counsellor on international relation for American Braille Press in 1946 and visited as many as 35 countries between 1946 and 1957. She met several high profile world leaders during this time.

14. During her visit to Japan in 1948, it is believed that 2 million Japanese came out to see her and the trip was a huge success.

Helen Keller impacted millions of lives around the world, particularly those that suffered from disabilities. She was a ray of hope for those who suffered pain and dared many to dream despite the odds stacked against them.

(The above story first appeared on LatestLY on Jun 27, 2020 07:30 AM IST. For more news and updates on politics, world, sports, entertainment and lifestyle, log on to our website latestly.com).