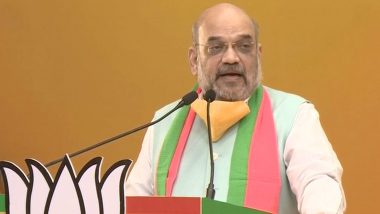 New Delhi, September 13: Hindi was adopted as one of the official languages of India on September 14, 1949. Therefore, Hindi Diwas is observed on September 14 every year. To share his message on Hindi Diwas 2020, Union Home Minister Amit Shah will address citizens tomorrow i.e September 14. Amit Shah's address will be telecast live on Doordarshan National channel at 10: 30 am tomorrow. Hindi Diwas 2020 Date And Significance: Know The History And Celebrations of the Day That Celebrates the Hindi Language.

Here it may be noted that Shah has been readmitted to AIIMS for a complete medical check-up ahead of Parliament's Monsoon Session beginning tomorrow. He had tested positive for coronavirus on August 2 but later tested negative on August 14. However, he was admitted to AIIMS on August 18 again for medical care after recovering from the viral infection. He had also received treatment for COVID-19 at Medanta Hospital in Gurugram.

Hindi was adopted as one of the official languages of India by the Constituent Assembly on September 14, 1949. The first Hindi Diwas was celebrated in 1953. According to the 2001 Indian census, 258 million people in India regarded their native language to be Hindi, however, when other Hindi dialects are included to this figure, it becomes 422 million Hindi speakers in India.

(The above story first appeared on LatestLY on Sep 13, 2020 04:40 PM IST. For more news and updates on politics, world, sports, entertainment and lifestyle, log on to our website latestly.com).