The day marks the achievements and landmarks of the Indian Navy accomplished since its inception. The Navy Day marks an important discourse in the Indian history post-independence. We provide you with the history and significance of Navy Day 2019 along with the theme decided this year. 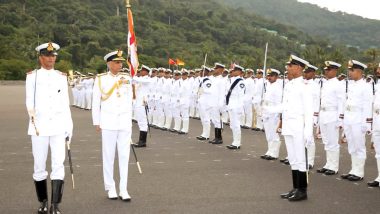 The Navy Day in India is celebrated amidst huge festivities and in a grandeur manner. Before the celebration of Navy Day, or Indian Navy Day, the leading days are celebrated as Navy Week where a score of activities takes place across the country. It marks the achievements and landmarks of the Indian Navy accomplished since its inception. Every year, a different theme is set to mark the event, which highlights the significance of the country's naval force. Below in this article, we provide you with the history and significance of Navy Day 2019 along with the theme decided this year. 'Indian Navy Plans to Have Three Aircraft Carriers, 50 Warships Under Construction', Says Admiral Karambir Singh.

The Navy Day marks an important discourse in the Indian history post-independence. So what is Navy Day? Why is Navy Day celebrated? What is the significance of Navy Day? If these questions are pondering in your mind, then we covered your back in this Navy Day 2019 article. Sub Lieutenant Shivangi Becomes Indian Navy's First Woman Pilot, Watch Video As She Joins the Armed Forces.

Every year, a different theme is decided for the Indian Navy day. Last year, it was "Indian Navy, Mission-deployed and Combat-ready." And for Navy Day 2019, the theme is "Indian Navy - Silent, Strong and Swift."

The Navy Day is observed in India on December 4 every year. It is an annual affair which sees splendour celebrations across the length and breadth of the country. The date, December 4, was chosen as Navy Day, because the Indian Navy sank 4 Pakistani vessels in the Indo-Pak 1971 War, thus marking India’s superiority in the war.

During ‘Operation Trident’, the Indian Navy launched an offensive on the Karachi harbour, which saw hundreds of Pakistani personnel die in the attack, which resulted in their defeat eventually. Earlier, the Navy Day in India was observed on Royal Navy’s Trafalgar Day, i.e. October 21. But after the Indo-Pak War in 1971, India decided to do away the British traditions and rather celebrate the Navy Day on December 4, to commemorate the victory and death of all servicemen during the war.

What is the Significance of Navy Day?

December 4 is considered to be one of the most important days in its history. The Navy Day is celebrated as a mark of respect to Indian Navy’s bravery and sacrifice shown during the Indo-Pak War in 1971. It not only sank 4 Pakistani vessels, including PNS Khaibar, PNS Shah Jahan, and PNS Muhafiz but also caused heavy casualties in the opponent’s side.

The attack marked the beginning of Operation Trident, which saw India taking a swipe at Pakistan in all the three departments – air, naval, and land. During this operation, the Indian Navy successfully warded off any offensive planned by Pakistan, which helped India secure the waters in the war.

The Indian Navy overlooks the grandeur Navy 2019 celebrations where several ships are opened for visitors, and even grandeur air celebrations take place. We at LatestLY thank all the servicemen, who lost their lives, for their valour and sacrifice. We wish you all a very ‘Happy Navy Day 2019!’

(The above story first appeared on LatestLY on Dec 03, 2019 05:05 PM IST. For more news and updates on politics, world, sports, entertainment and lifestyle, log on to our website latestly.com).