It is a festival dedicated to Goddess Kali and celebrated on the new moon day in the Kartik month of Hindu calendar. This year it falls on November 4, Thursday. On this day, the people of Bengal, Odisha, Assam and Mithila worship goddess Kali and the rest of India and Nepal worship Goddess Laxmi thus celebrating Diwali. Kali Puja is a Hindu festival celebrated in Bengal, Mithila, Odisha, Assam and in the town of Titwala in Maharashtra. It falls on the same day as Diwali. Ahead of Kali Puja 2021, we bring you a bunch of new and beautiful Kali Puja 2021 wishes, Happy Kali Puja 2021 greetings, Kali Puja messages, Kali Puja HD wallpapers, Subho Kali Puja photos, SMS, and a lot more to celebrate the festival. Top Kali Puja 2021 Wishes, Greetings, GIFs, Messages, HD Images and Wallpapers to Celebrate Shyama Puja With Family and Friends.

It is a festival dedicated to Goddess Kali and celebrated on the new moon day in the Kartik month of the Hindu calendar. This year it falls on November 4, Thursday. On this day, the people of Bengal, Odisha, Assam and Mithila worship goddess Kali, and the rest of India and Nepal worship Goddess Laxmi, thus celebrating Diwali. We at LatestLY have curated messages for all at one place for Diwali, Laxmi Puja and Kali Puja. You can select from our wide range of WhatsApp stickers, GIF Images, HD wallpapers and SMS to send wishes on this auspicious day to all your loved ones. 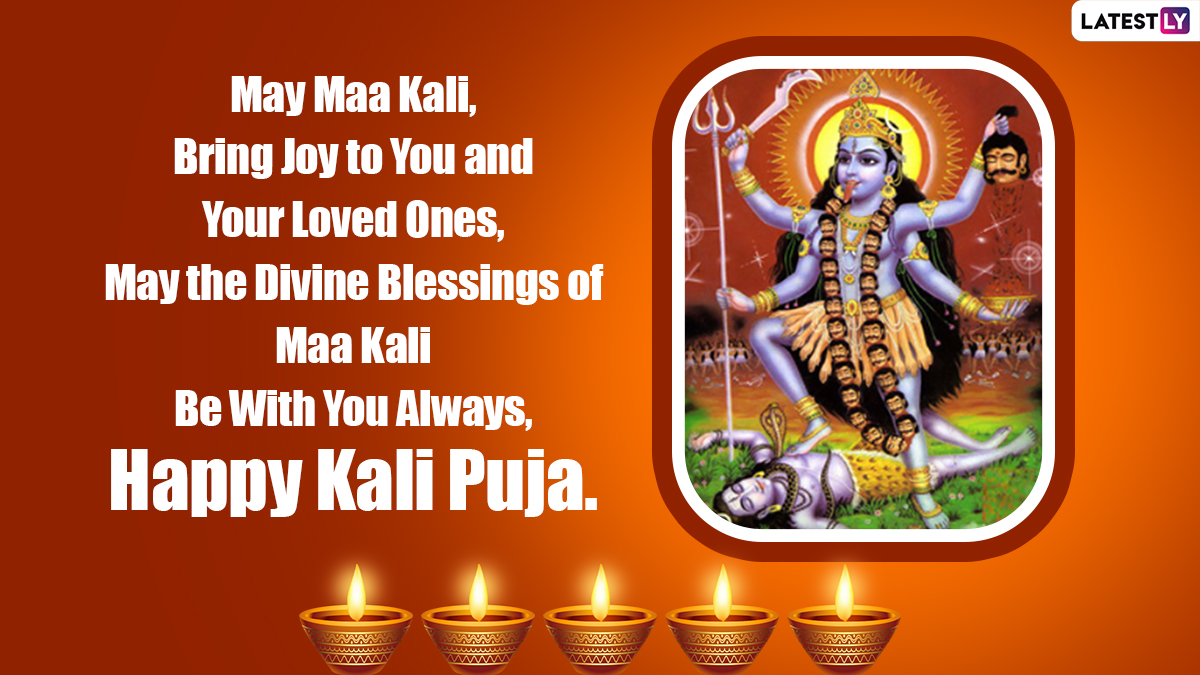 WhatsApp Message Reads: May Maa Kali, Bring Joy to You and Your Loved Ones, May the Divine Blessings of Maa Kali Be With You Always, Happy Kali Puja. 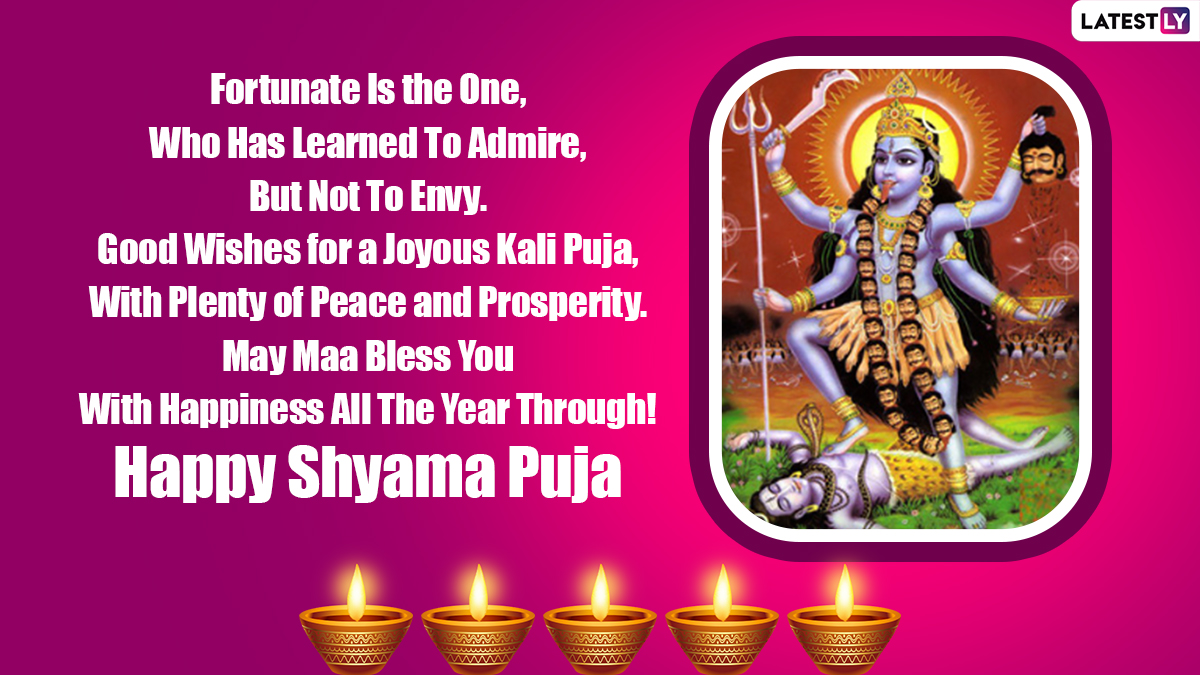 WhatsApp Message Reads: Fortunate Is the One, Who Has Learned To Admire, But Not To Envy. Good Wishes for a Joyous Kali Puja, With Plenty of Peace and Prosperity. May Maa Bless You With Happiness All The Year Through! Happy Shyama Puja 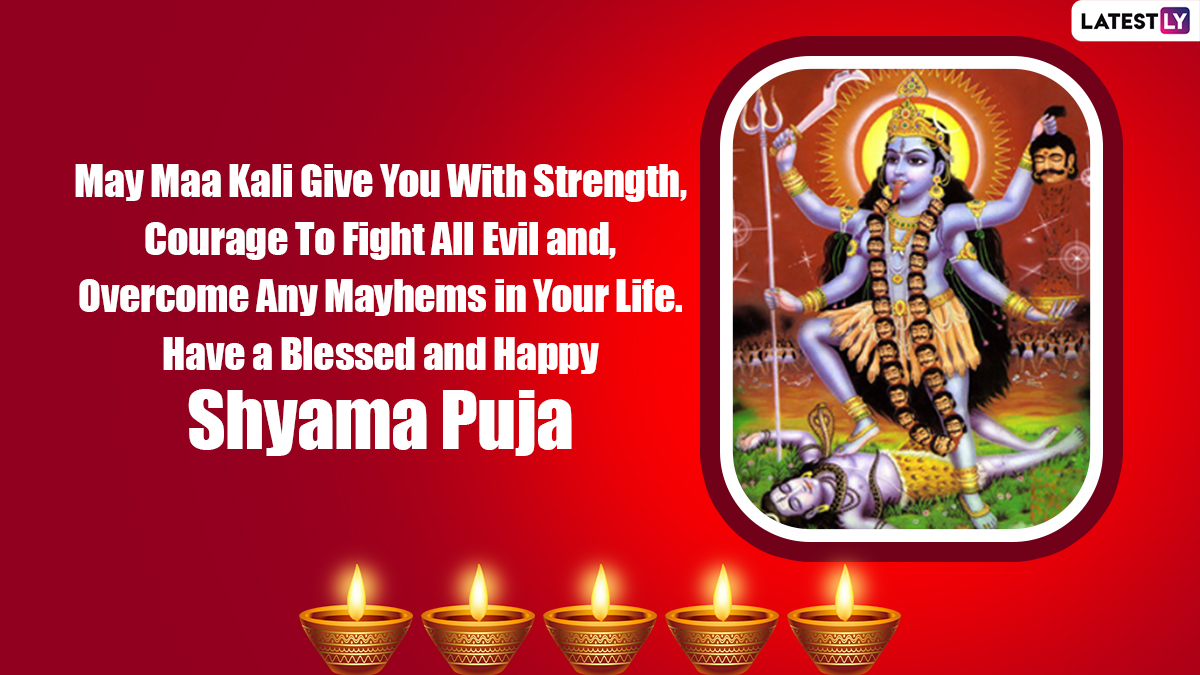 WhatsApp Message Reads: May Maa Kali Give You With Strength, Courage To Fight All Evil and, Overcome Any Mayhems in Your Life. Have a Blessed and Happy Shyama Puja 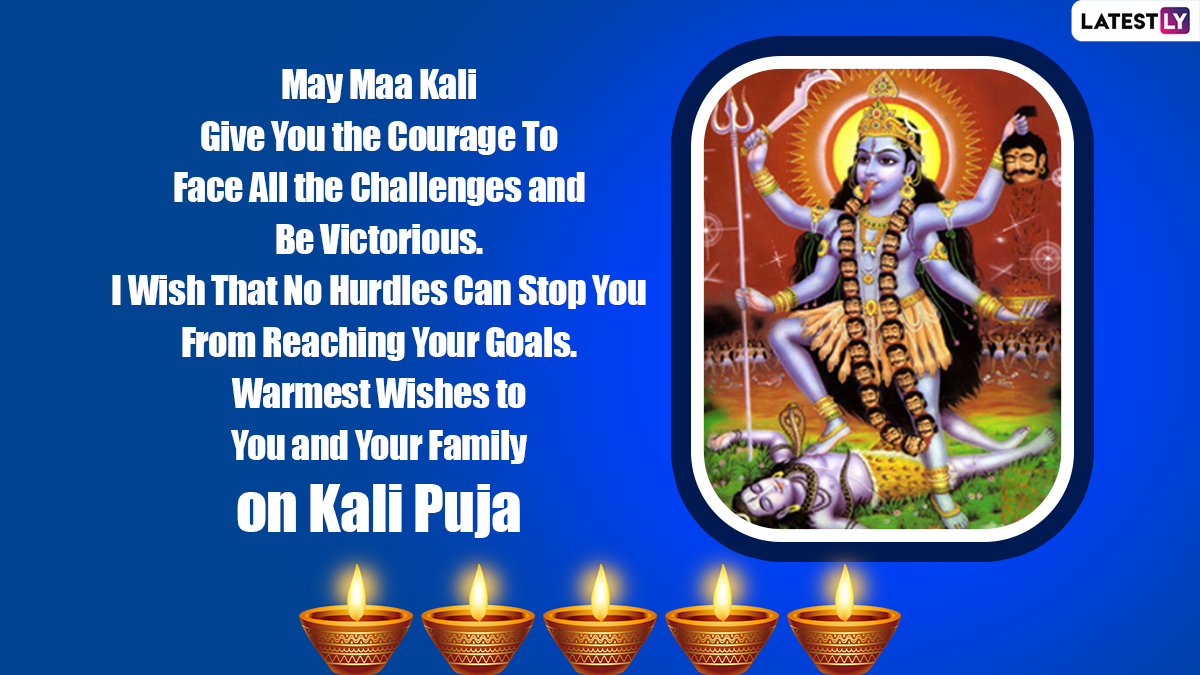 WhatsApp Message Reads: May Maa Kali Give You the Courage To Face All the Challenges and Be Victorious. I Wish That No Hurdles Can Stop You From Reaching Your Goals. Warmest Wishes to You and Your Family on Kali Puja 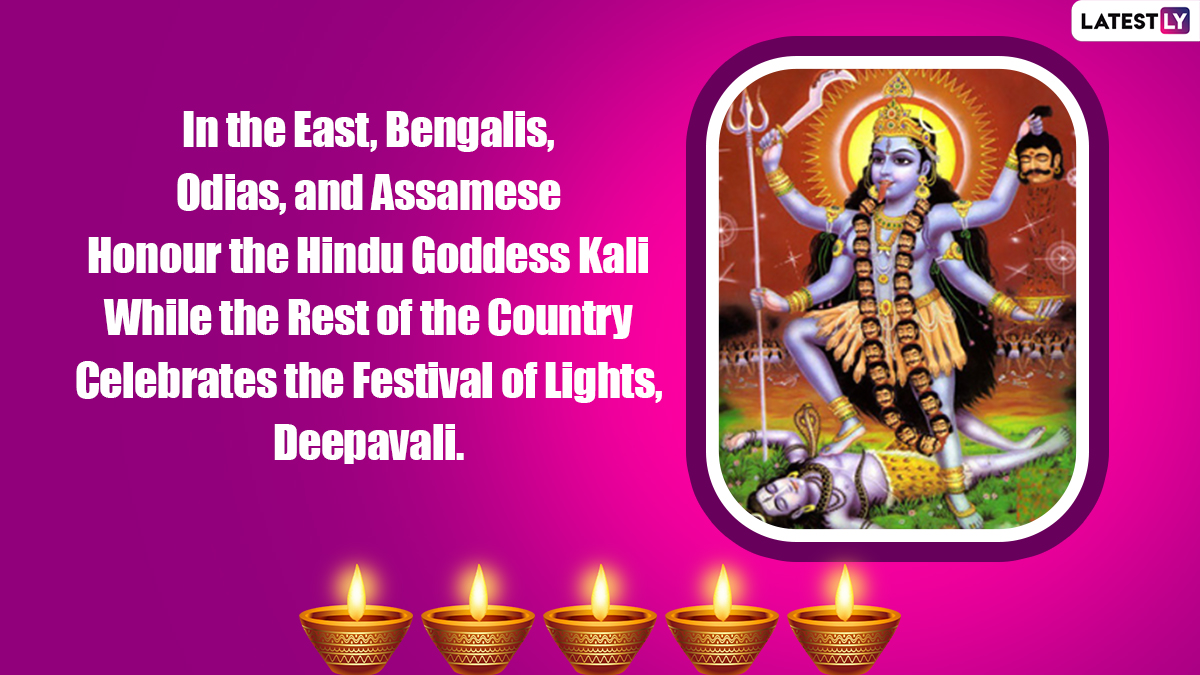 WhatsApp Message Reads: In the East, Bengalis, Odias, and Assamese Honour the Hindu Goddess Kali While the Rest of the Country Celebrates the Festival of Lights, Deepavali.

People who observe this day honour goddess Kali in their house with clay scriptures and idols. She is offered red hibiscus flowers, sweets, rice and lentils. The one who worships Goddess Kali on this day is advised to meditate throughout the night until dawn. In Kolkata, Bhubaneswar and Guwahati, celebrations are held in a large cremation where she is believed to dwell.

On Diwali, the goddess Lakshmi is worshipped in three forms name Lakshmi, Saraswati and Kali. According to Hindu mythology, two demons named Shambhu and Nishambhu went to the Himalayas to capture Maa Durga. A battle took place between King Indira and the demons where the gods were defeated. At this point, Maa Durga got ferocious and turned into Maa Kali. After killing the demons, she lost control over herself and went on killing humans. Lord Shiva came in front of her to save the innocents, and she stepped on his chest. On this, she realised her mistake and stuck her tongue out in embarrassment.

It is from this incident that a picture of Kali is depicted as her foot on Lord Shiva. Observing this auspicious day with Kali Puja, here are wishes that you can send depicting the three avatars of Goddess Lakshmi. Wishing everyone a Happy Diwali and Kali Puja 2021!

(The above story first appeared on LatestLY on Nov 03, 2021 03:32 PM IST. For more news and updates on politics, world, sports, entertainment and lifestyle, log on to our website latestly.com).