'Kashi Film Festival' to Be Held For the First Time in Varanasi, Will Give New Identity to Uttar Pradesh

The 03-day film festival to be held for the first time in Varanasi will give a new direction to the construction of film city in UP. 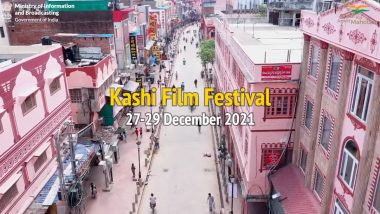 The 03-day film festival to be held for the first time in Varanasi will give a new direction to the construction of film city in UP.

Comedian Raju Srivastava's act set to tickle the ribs of the people attending the Kashi Film Festival. Uttar Pradesh Govt Provides Free Food Grains to Over 82% of Beneficiaries in December Under its Extended Scheme.

Known for its rich traditions and culture for centuries, a new chapter is set to be scripted in Kashi this week as a three-day Kashi Film Festival will begin here from December 27. The festival will not only show glimpses of Hindustani classical music and dance but will also refresh the memories of famous philosopher poets, writers, musicians and the Banaras Gharana.

Famous stand-up comedian Raju Srivastava will also be present in the temple town to tickle the ribs of the public while Dream Girl Hema Malini's performances will also make the do memorable. It is for the first time that such a Film Festival is being organized in the city of Lord Shiva. The festival is being organised in collaboration with Film Bandhu, the Government of Uttar Pradesh and the Information and Broadcasting Ministry, the Government of India.

The festival will be inaugurated on December 27 at 04 pm in Kashi city where the chief guest, Minister of State for Tourism, Culture, Charitable Affairs, Protocol Dr Neelkanth Tiwari and Secretary, Ministry of Information and Broadcasting, Government of India Apoorva Chandra will be the special guest. During this, the presentation of Manoj Joshi at the International Cooperation and Convention Center in Varanasi is set to be a centre of attraction. Comedian Raju Srivastava and singer Kailash Kher's live show at Dr Sampoornanand Sports Stadium, Sigra will make the evening pleasant from 6 pm onwards.

Anurag Thakur, Union Minister of Information and Broadcasting, Government of India, will be the chief guest of the Kashi Film Festival to be held on December 28 in Varanasi. During this, a panel discussion will be organized from 10:30 am to 12 noon on the topic “Varanasi – Journey from a Cultural, Mythological and Historical Heritage to a Modern City”. The topic of discussion of the second panel will be on 'Music and Geet - Virasat of Banaras' with timings from 12:30 PM to 02 PM.

Subsidies will also be distributed along with the closing ceremony at 04 pm. On Thursday evening famous film actress and Bharatiya Janata Party MP Hema Malini will captivate the hearts of the audience with her cultural presentation. This program will be held at the International Cooperation and Convention Center in Varanasi itself.

A panel discussion will be held on December 29 on the topic “Uttar Pradesh as an important centre for film production and the potential of regional cinema”. And the evening will mark the closure of the first-ever film festival in Kashi with an offering by singer Ravi Tripathi and actor Ravi Kishan.

(The above story first appeared on LatestLY on Dec 26, 2021 07:05 PM IST. For more news and updates on politics, world, sports, entertainment and lifestyle, log on to our website latestly.com).