National Pit Bull Awareness Day 2020 Date And Significance: Know The History of the Observance That Highlights Stereotypes About the Breed And Celebrates the Dog 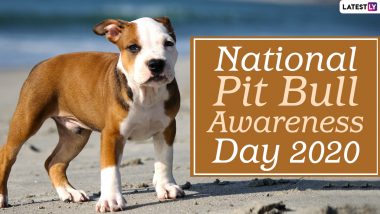 National Pit Bull Awareness Day (NPBAD) is observed on October 26 is to appreciate and educate people on the perceptions and stereotypes about bully breed dogs referred to as pit bulls. NPBAD was established to promote positive communications in communities that the dogs live. National Pit Bull Awareness Day is an initiative to restore the image of the American Pit Bull Terrier. NPBAD was created to help raise awareness on the truth about Pit Bulls in 2007. It was started by Jodi Preis of Bless the Bullys, a pit bull rescue and education group in Middle Tennessee. 'Dramatic' Pit Bull Pretends to Faint in This Viral Video, Sparks Meme-Fest Online.

For nearly 100 years, pit bulls were considered 'Nanny Dogs' as they were so loyal and loving. Parents would often leave their babies with their pit bulls as they went to stores because they were trustworthy. Pit bulls were born out of a mixture of a bulldog and a terrier in England in the 18th century. However,r over the years, they have garnered the reputation of being ferocious and dangerous beasts. However, this also depends on how these humans decide to treat the dogs. The observance is thus to create awareness about how loving, kind and compassionate these dogs truly are. You can also promote pit bulls by sharing pictures of the dog on social media using the hashtag #NationalPitBullAwarenessDay.

(The above story first appeared on LatestLY on Oct 25, 2020 09:16 AM IST. For more news and updates on politics, world, sports, entertainment and lifestyle, log on to our website latestly.com).