Navratri will be observed from October 10 to October 18 this year. 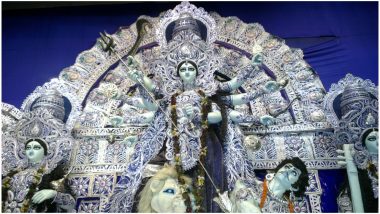 Navratri, the nine-day Hindu festival marking the victory of Goddess Durga has begun. During the festival, devotees offer prayers to the Goddess seeking blessings. According to the Hindu calendar, the festival is celebrated in the month of Ashvin which falls in the month of September or October in the Gregorian calendar. Navratri will be observed from October 10 to October 18 this year. The tenth day will be celebrated as Dussehra.

Navratri like any other Indian festival has many Hindu mythologies and stories attached to it. While the day is celebrated across the country, festivities change in different states. On the first day of Navratri, social media users have taken to Twitter extending greetings. It is believed that Durga defeated demon Mahishasura during this month and hence her victory is celebrated over the period of nine days. From celebrities, politicians, social media influencers have all taken to Twitter wishing Navrati. Navratri 2018 Dates, Days & Tithi Calendar: Shubh Puja Muhurat & Time for Aarti During Nine-Day Sharad Navaratri Festival.

May this Navratri fill your life with the colours of happiness and prosperity. Wishing you and your family a very Happy Navratri ! pic.twitter.com/KibjYcQVW1

Emraan Hashmi wish all of you a Happy Navratri. May the divine powers bless us all with good health and prosperity.

Cherishing new beginnings with the arrival of Maa Durga at home. May Vaishno Mata bless my country. #HappyNavratri pic.twitter.com/79Qcdr0nqv

With a plenty of peace and prosperity, may everyone's life be filled with happiness on this pious festival of Navratri.#HappyNavratri pic.twitter.com/Fwlx8iF8QD

'Heartiest greetings on the auspicious occasion of Navratri'

My heartiest greetings on auspicious occasion of #Navratri. May this festival of worshiping Mother Goddess in her different ‘Swaroops’, fill us wd wisdom n joy. Let our mind, heart n soul be full of devotion towards Divine Mother, who is absolute creative energy.#HappyNavratri pic.twitter.com/s19pb8a4lL

Cherishing new beginnings with the arrival of Maa Durga at home. May Vaishno Mata bless my country. #HappyNavratri pic.twitter.com/79Qcdr0nqv

May Goddess Durga destroy all evil around you and fill your lives with prosperity and happiness in this Devi Paksha.#HappyNavratri pic.twitter.com/jGxTBtl4hv

Navratri greetings to all!

In Gujarat, Rajasthan, Maharashtra and in parts of some other states, dance forms like Garba and Dandiya are popular during the festival. The festival holds special importance in West Bengal where it is known as Durga Puja. People bring Durga idol home and offer special prayers to it. The idol is immersed in water on Dashami or Dussehra. Durga pandals are set on every nook and corner of the street. People visit friends and family taking part in the celebrations. We wish all our readers a very Happy Navratri.

(The above story first appeared on LatestLY on Oct 10, 2018 10:49 AM IST. For more news and updates on politics, world, sports, entertainment and lifestyle, log on to our website latestly.com).