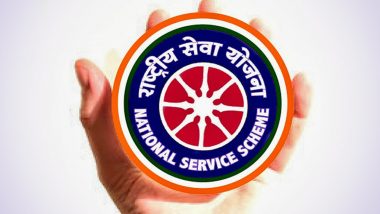 The National Service Scheme (NSS) day is observed in India every year on September 24. The NSS Day 2020 falls on Thursday. The NSS is an Indian government-sponsored public service program conducted by the Ministry of Youth Affairs and Sports. The scheme was launched in Mahatma Gandhi’s Centenary year in 1969.

On September 24, 1969, the then Union Education Minister VKRV Rao launched the NSS at 37 universities all states. Now, the scheme has been extended to all states and universities in the country, and also +2 level institutes in many states. Rajnath Singh Interacts with Volunteers, Coordinators on National Education Policy.

After independence the University Grants Commission (UGC), headed by S Radhakrishnan, recommended the introduction of voluntary national service in academic institutions. In 1952, the government stressed on the need for social and labour service by Indian students for one year. In 1958, the then Prime Minister Jawaharlal Nehru, in a letter to the chief ministers, considered the idea of social service as a prerequisite for graduation. He also directed the Ministry of Education to formulate a suitable scheme for the introduction of national service into academic institutions.

A camp of student representatives of universities and institutions of higher education was concluded on 7 June 1969. KKGupta from DU was declared first volunteer. The Planning Commission sanctioned an outlay of Rs five crore for the NSS during the Fourth Five-Year Plan. The scheme was officially launched on September 24, 1969. Will Mobilise over 1 Cr Volunteers to Help in India's Fight Against Covid-19: Rijiju.

The symbol for the NSS has been based on the giant Rath Wheel of the world-famous Konark Sun Temple. The wheel signifies the movement in life across time and space. The eight bars in the wheel represents 24 hours of a day. The red colour indicates that the volunteer is full of young blood that is lively, active, energetic and full of high spirit. The navy blue colour indicates the cosmos of which the NSS is tiny part.

At national level, the nodal authority works with state-level NSS cells. State-level NSS cells are responsibility of the respective state governments. Each university has University level NSS cell under which institutions (schools and colleges) based NSS units operate. Several activities like, cleaning, afforestation and awareness rallies are organised on this day. NSS awards are also given on the NSS day recognize the voluntary service rendered by volunteers.

(The above story first appeared on LatestLY on Sep 24, 2020 08:00 AM IST. For more news and updates on politics, world, sports, entertainment and lifestyle, log on to our website latestly.com).