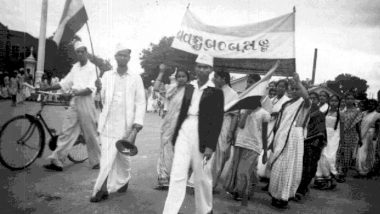 1. What led to the announcement of Quit India Movement was the failure of The Cripps Mission in March 1942. The British had sent a delegation, headed by Stafford Cripps, to India to broker a deal with the Indians to have their full support and co-operation during the war, and in return, the British Raj would consider extending the Dominion status among others. However, the talks failed.

2. Another thing that led to the Quit India Movement was the decline of the ‘August Offer’ made by the British in August 1940, by both Congress and then All India Muslim League. Nevertheless, nothing made the British more vulnerable than the commencement of World War II and the growing rebellion in the Indian sub-continent. Quit India Movement Day 2020: Fight Against Injustice, Don't Be Afraid, Says Rahul Gandhi on 78th Anniversary of Quit India Movement.

3. Not many people know that it was in July 1942, in Wardha Maharashtra, that the Congress Working Committee passed a resolution demanding complete independence. It also said that if the demands were not fulfilled, there would be mass civil-disobedience movement.

4. Another lesser-known fact is that not all the stakeholders were happy with the resolution. What happened next was that Jawaharlal Nehru and Maulana Azad became apprehensive and C. Rajagopalchari quit Congress. However, Sardar Vallabhbhai Patel, Rajendra Prasad, and Anurag Narayan Sinha fully supported the decision.

5. The British Raj denied giving into Indian leaders demands of ‘immediate independence’ made during the Quit India Movement and said that they would only consider after World War II would end.

6. The first public meeting of the Quit India Movement took place in Bombay (now Mumbai), near the Gowalia Tank Maidan, on August 8.

7. It was during the Quit India Movement when the Mahatma Gandhi-led Congress demanded ‘An Orderly Withdrawal of the British from India’.

8. Immediately after Mahatma Gandhi gave his famous ‘Do or Die’ speech on August 8, thousands of Congressmen and freedom fighters were arrested by the British in the next 48 hours.

11. It is said that the Britishers had the support of the princely states, British Indian Army, All India Muslim League, Indian Civil Service, Hindu Mahasabha, Viceroy’s Council and other major stakeholders, in opposing the Quit India Movement.

12. The British were successful in taming the full-blown Quit India movement eventually, after numerous arrests of top leaders, and thus create a devoid of communication and further plan of action. However, it was during this time that the British had realised that it would not be possible to govern India furthermore, and planned on exit India gracefully after World War II ended. Two years after the WW II ended, India achieved its freedom.

13. Not many people know that the Reserve Bank of India issued a Re 1 coin, in 1992, to commemorate the 50th anniversary (Golden Jubilee) of the Quit India Movement.

As we celebrate the 78th anniversary of the historic occasion of Quit India Movement, we at LatestLY salute to the lives that were laid down in gaining the independence of our great country, India, on August 15, 1947.

(The above story first appeared on LatestLY on Aug 08, 2020 07:00 PM IST. For more news and updates on politics, world, sports, entertainment and lifestyle, log on to our website latestly.com).