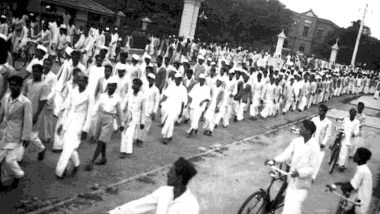 The Quit India Movement, also known as the Leave India Movement or August Movement or August Kranti was the initiative launched at the Bombay session of the All-India Congress Committee by Mahatma Gandhi on August 8, 192. The movement demanded an end to British Rule of India. It was a great mass struggle of the Indian people for freedom. The Quit India Movement is considered as the final whistle to end British Raj in the country. It was on this date, when the Bombay Session of All India Congress Committee by Mahatma Gandhi during World War II passed the resolution of Quit India Movement. August 8, 2020 marks the 78th anniversary of the great freedom struggle. As we observe the day as August Kranti Diwas and remember each one of those who participated in the freedom struggle, let us know the history, significance and more about the Quit India Movement.

The Quit India Movement is of great significance in the history of the country’s freedom struggle. The Cripps Mission was a failed attempt in late March 1942, by the British government to secure full Indian cooperation for their efforts in WWII. In the same year, in August, Gandhiji started the Quit India Movement and decided to launch a mass civil disobedience movement, a ‘Do or Die’ call to force the British to leave India. The movement was followed by large-scale violence directed at railway stations, telegraph offices, government buildings and other institutions of the colonial rule.

However, all the prominent leaders were arrested, the Congress was banned, and police officials and army were brought to suppress the movement. The protest was held from August 9, 1942 to September 21, 1942. Gandhiji was imprisoned at Aga Khan Palace, Pune. The British government declared INC to be an unlawful association. Meanwhile, Netaji Subhas Chandra Bose, silently ran away from the British detention in Calcutta, reached foreign lands and organised Indian National Army (INA) to overthrow British from India.

Quit India campaign was crushed in 1944. British refused to grant immediate independence, citing that it can only happen after WWII ended. Gandhiji was released in 1944 from the prison, and he continued his protest. By the end of WWII, Britain’s position in the world changed dramatically, and the demand for independence could no longer be ignored. The Quit India Movement, united the people of India against the British rule, and it is considered one of the significant campaign to the freedom of struggle in the country. The movement was an agitation that shook the foundation of the British rule.

(The above story first appeared on LatestLY on Aug 07, 2020 06:54 PM IST. For more news and updates on politics, world, sports, entertainment and lifestyle, log on to our website latestly.com).