Rosa Parks Day 2020 Date, History and Significance: Here’s What You Should Know About the Day Dedicated to Honour the American Civil Rights Leader

Rosa Parks Day is a significant observance, especially in current times. In this article, we bring you Rosa Parks Day 2020 date, history, significance and everything you need to know about this civil disobedience movement in the USA that began with Rosa Parks. 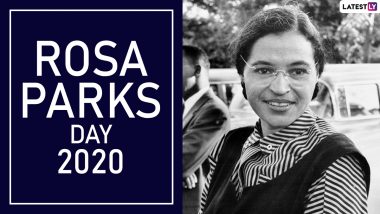 Revolution begins with a single person standing up for what is right, or in the case of Rosa parks, continuing to sit down. The American activist has been an inspiring role model for many for her sheer vigilance towards fighting for the right of African American people, and she is rightly recognised as the first lady of civil rights. Rosa Parks Day is a holiday in honour of the inspirational activist and Rosa Parks Day 2020 will be widely celebrated in Ohio and Oregan on December 1 - the day that she was arrested. Rosa Parks Day is a significant observance, especially in current times. In this article, we bring you Rosa Parks Day 2020 date, history, significance and everything you need to know about this civil disobedience movement in the USA that began with Rosa Parks.

Why is Rosa Parks Day Celebrated?

Rosa Parks day is celebrated in honour of the civil rights activist who was arrested for civil disobedience on December 1, 1955. Rosa Parks was sitting in her “coloured” section seat on a bus in Montgomery, Alabama when the driver asked her to give her seat to a white male since all the “whites-only” seats were full. Parks refused to give her seat up and continues to remain seated. She was arrested for this act, in 1955 for violating the Alabama segregation laws that existed then. Ruth Bader Ginsburg Becomes 1st Woman to Lie in State at US Capitol.

While Rosa Parks was not the first one to be arrested for this completely normal act, her case was recognised by the National Association for the Advancement of Colored People (NAACP). They believed that the Parks case has the power to stir people into a civil disobedience movement to put an end to the blatantly discriminatory segregation laws. Parks was an extremely vocal citizen who had raised her voice against the racial segregation laws many times, and her arrest led to a political and social campaign, under which thousands boycotted the Montgomery buses for more than a year. In fact, the uproar against this injustice actually led to a United States Supreme Court decision that declared the Alabama and Montgomery laws that segregated buses were unconstitutional.

Rosa Parks went on to become a notable activist who played a key role in fighting for the rights of Black people and an international icon of resistance of racial segregation. She went on to collaborate with various civil rights leaders like Edgar Nixon, president of the local chapter of the NAACP; and Martin Luther King Jr., a new minister in Montgomery who gained national prominence in the civil rights movement. Rosa Parks continues to be an icon in America and is looked up to for her sheer defiance and confidence in standing for what was right, unflinchingly. Here’s wishing everyone a Happy Rosa Parks Day!

(The above story first appeared on LatestLY on Nov 30, 2020 02:55 PM IST. For more news and updates on politics, world, sports, entertainment and lifestyle, log on to our website latestly.com).