Saint Andrew’s Day 2020 Date and Significance: Know All About the Observance on the Feast Day of Andrew the Apostle 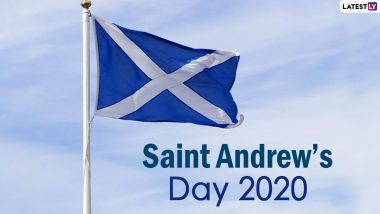 Saint Andrew's Day, also known as Andermas is the feast day of Andrew the Apostle. It falls on November 30. Saint Andrew's Day is Scotland's official national day. It is a national holiday in Romania since 2015. Saint Andrew is the disciple in the New Testament in the Bible. He is the one who introduced his brother, the Apostle Peter, to Jesus as the Messiah. Saint Andrew's is the patron saint of Cyprus, Scotland, Greece, Romania, Russia, Ukraine, the Ecumenical Patriarchate of Constantinople, San Andres Island (Colombia), Saint Andrew (Barbados) and Tenerife. Saint Andrew's Day marks the beginning of the traditional Advent devotion of the Saint Andrew Christmas Novena. Ahead of Saint Andrew's Day 2020, we bring to you the date, history and significance of the observance. Difference Between All Saints' Day and All Souls Day 2020 Date: Know The Significance, History And Traditions of the Observances.

It is believed that Saint Andrew was born between the years 5 AD and 10 AD in a place that is now part of Israel. According to Christianity, he went on to become one of the 12 disciples of Jesus Christ. Andrew's brother, Simon Peter, was one of the disciples and they both lived in Galilee, where they were fishermen.

He is considered the patron saint of Scotland and has stories attached to it. According to a story, in the ninth century, King Angus in Scotland was preparing for a battle against the English. St Andrew appeared to King Angus in a dream promising him victory and on the day of the battle, an X symbol appeared in the sky. The King vowed that if they won, St Andrew would be made the patron saint of Scotland - and that is exactly what happened. St Thomas Day 2020 Date And Significance: Know The History, Practices And Celebrations of the Day Dedicated to the Apostle.

The Scottish flag has the X-shaped cross on it, as it is St Andrew's symbol.  Scottish people celebrate St Andrew's Day in different ways. In different countries, people observe it differently. A special type of party called a ceilidh - pronounced "kay-lee" - is observed where Scottish people dance. Traditional food like cullen skink, a type of fish soup or lamb is prepared on the day.

(The above story first appeared on LatestLY on Nov 29, 2020 03:38 PM IST. For more news and updates on politics, world, sports, entertainment and lifestyle, log on to our website latestly.com).