Rajasthan will see Vishwakarma puja celebration in this month aka February celebrated amongst the Tahsildar community in Rajasthan. 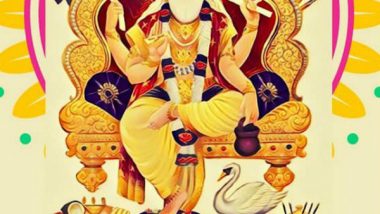 History and Significance of Vishwakarma Jayanti

The most important and auspicious day for artisans and craftsmen, Vishwakarma Jayanti is celebrated as the birth anniversary of the divine architecture- Lord Viswakarma. It is celebrated when the Lord Surya leaves Leo zodiac sign and enters Virgo sign. Lord Viswakarma's science of architecture and mechanics are mentioned in the Rig Veda and Sthapatya Veda. Lord Vishwakarma was born because of sea churn (Samudra Manthan) which was carried out by Gods and Devils together and therefore is celebrated on the day according to Hindu mythology and scriptures. Puranas have it that Lord Vishwakarma created the whole world. He is said to have constructed the Holy city of Dwaraka which was ruled by Lord Krishna.

Rajasthan will see Vishwakarma puja celebration in this month aka February celebrated amongst the Tahsildar community in Rajasthan. This year, 2019 will see the Vishwakarma puja celebration on 17th of Feb and Shubh Muhurat is said to be from 5 am in the morning. As a part of special prayers and puja are held in shops, factories, offices and workplaces are decorated with flowers and devotees set to worship Lord Vishwakarma and His ‘Vahan’ (vehicle), the elephant at these decorated places. Next, the idol Lord Vishwakarma is placed and puja rituals are held. After the completion of puja, Prasad is distributed among all the workers and workers are seen offering their tools to the lord and no work is done on this day. The food prepared is eaten together as a part of prasad. Some people also fly kites on this day.

The festival is mostly celebrated in industries and factories. People ask for prosperity from Lord Vishwakarma and the safety of the factory, manufacturing units, machinery and betterment of the people working over there.

(The above story first appeared on LatestLY on Feb 17, 2019 11:38 AM IST. For more news and updates on politics, world, sports, entertainment and lifestyle, log on to our website latestly.com).