The festival is most importantly celebrated in the industrial topography and among the factories especially on the floor of the shop or manufacturing head office. 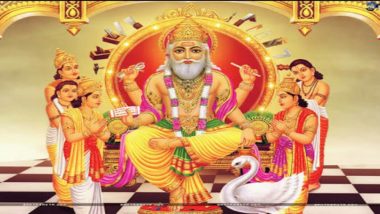 According to legends, Lord Vishwakarma was born because of sea churn (Samudra Manthan) which was carried out by Gods and Devils together. Hindu mythology and scriptures state that Lord Vishwakarma created the whole world. He is said to have constructed the Holy city of Dwaraka which was ruled by Lord Krishna. He is mentioned in the Rig Veda and is credited with Sthapatya Veda, the science of mechanics and architecture. It is also believed that most of the mythological architectures are the handiwork of Vishwakarma such as Swarg Lok and Lanka. He is also the architect of the powerful weapon carried by Indra which is known as the Vajra. Other popular mythological architectures which have been built by Vishwakarma are the Indraprastha, grand palace of the Pandavas in Mahabharata and Hastinapur or the abode of the Kauravas.

Since Vishwakarma is the God of architecture and engineering, every year Hindus celebrate the Vishwakarma puja with great zeal. Usually people organise a puja at their factories and industrial areas. As a mark of reverence, Vishwakarma puja is observed by engineers, architects, artisans, mechanics, smiths, factory workers and others. On this day, the workers take a break from work and all the machines are worshipped. The puja is a resolution time for all the workers and craftsmen to increase their productivity. People pray to the Lord of architecture for a better future and safe working conditions. They seek blessings from the Lord to excel in their respective fields. Statues and pictures of Lord Vishwakarma are also installed in factories and offices. Vishwakarma is also observed a day after Diwali with Govardhan Puja in the month of October-November.

The Vishwakarma puja falls on the last day of the Bengali month of Bhadra which is also known as Bhadra Sankranti or Kanya Sankranti. As per DrikPanchang, the Sankranti moment or time to perform the puja is 07:01. The puja is started by placing a statue or an image of Lord Vishwakarma at the workplace. Devotees should take bath before sitting for the puja and remember Lord Vishnu in their minds at the time of the puja. At many places, yajna is organised to celebrate the day. People also tie a Raksha sutra or the holy thread in their hand to remember Lord Vishwakarma. Offering of the water, vermillion, flower and sweet is done to the machinery. The offering of the prasad is then distributed among the people after the puja is complete.

The festival is most importantly celebrated in the industrial topography and among the factories especially on the floor of the shop or manufacturing head office. The Lord Vishwakarma is worshipped for the safety of the factory, manufacturing units, machineries and betterment of the people working over there.

(The above story first appeared on LatestLY on Sep 17, 2018 09:48 AM IST. For more news and updates on politics, world, sports, entertainment and lifestyle, log on to our website latestly.com).